Assessment of Electrical Energy from Pyrolysis of Medical Waste in Jessore City, Bangladesh

Energy crisis and environmental degradation is considered most talked of the topics of modern global development. Medical waste has dangerous impacts on the environment. Besides, load shedding has come to be a great problem in socioeconomic development of Bangladesh for the reason that of the serious electricity crisis. This study also focused on energy recovery potentiality from plastic content of medical waste (PCMW) by converting it into electric energy. This plastic waste integrates an enormous amount of energy and consequently, attention in new renewable sources of energy from these wastes has been augmented, at the present time. Bangladesh as well as Jessore city faces an excessive environmental problem because of improper management of medical waste. This study demonstrated that the medical waste generation rate in Jessore city was found to be approximately 3 ton/day which is about 6.89% of total waste generation in this city throughout the study period. Besides, electric power generation projections from the PCMW were estimated at 74448 kWh per year respectively. This study suggested that appropriate PCMW management policy as well as awareness increasing regarding the management of PCMW is requirement for the development of existing status of living condition.

Energy is an important figure for economic development and human being development for any country. Energy consumption has been increasing day by day in Bangladesh for the causes of rapid population growth and economic expansion. There is lack of energy in Bangladesh and these lacks of energy are disturbing tremendously to Bangladeshi economy because it has to depend on seriously on imports. It has been apparent that energy consumption appearances a dual way trending with economic growth, one is growth which depend on accessibility of environmental friendly and cost effective energy sources and where the another is rate of economic growth which is perceived to be dependent on demand of energy (Dash, 2012). The energy consumption combination was assessed as: indigenous natural gas 27.45%, imported oil 11.89%, imported coal 0.44%, indigenous biomass 60% and hydro 0.23%. Maximum population about 77% of the total population lives in rural regions but nearly 50% of them have not any land, most of them depend on conventional biomass fuels. In rural regions the availability of electricity is merely 22% whereas about 32% have no access to electricity. Merely 3– 4% of the families depend on natural gas for cooking purposes. Merely around 2–3% families depend on kerosene for cooking purpose and about 90% population use biomass for their cooking purposes (Islam et al., 2008). The energy, which helps to runs our household appliances that comes from fuel. The medical waste especially plastic content of medical waste (PCMW) can also be used as fuel (Hossain et al., 2017). Plastic materials contain a gradually increasing quantity of the industrial and municipal waste going into landfill. For the causes of enormous amount of plastic wastes that increases environmental pressures. There are found various types of plastics in medical waste such as syringes, Saline bag, pipettes, tube, plastics/polythene etc.

Recycling of plastics has come to be a leading subject in plastics industry. Medical wastes have threats to the environment and require specific management and treatment before its last disposal (Hassan et al., 2008). Also, recycling of the waste is another issue especially in wastewater treatment plant. Emerging technology such as MBR can reduce these wastes.” (Sepehri et al., 2018).The innocuous dumping and treatment of medical wastes has been overlooked in Bangladesh. Medical waste is capable of triggering illnesses and disorder to people, if introduce to the environment it cause contaminating surface water, groundwater, soil and air (PRISM, 2005). For decreasing plastic waste, the technologies are advanced day by day, which are acceptable from the environmental opinion of view and are cost-effective. “Water supply also is another problem through the world especially due to the water scarcity. There are different emerging technologies such as MBR which can treat wastewater. Also, the waste sludge of this process can be used as a viable source of energy production. (Sepehri et al., 2018).Incineration and pyrolysis are generally engaged to acquire bio-fuel from plastic materials. Between these two methods, pyrolysis is one of the greatest effective and favorable techniques to acquire liquid fuel from PCMW (Howell, 1992). Pyrolysis is a thermal process which is operated in less or absence of oxygen. In this process, the biological elements of the decomposable elements produce liquid and gaseous products, which can be castoff as a source of energies and chemicals (Miskolczi et al., 2009). From this energy we can calculate or estimate electrical power. Very dissimilar experimental methods have been castoff to obtain energy from PCMW by thermal pyrolysis method. Various reactor structures have been established and used for example batch or semi batch (Hussain et al., 2012), spouted bed, fluidized bed, microwave, screw kiln and fixed bed (Lee and Shin, 2006). Batch, semi-batch and fixed bed reactors is popular because of its modest design and relaxed operation. In this study we use a batch type pyrolysis reactor to carry out the process. The purpose of this study is to discover alternate source of energy from PCMW through thermal pyrolysis method and estimates its electrical power.

Pyrolysis of PCMW was directed by a batch type fixed-bed reactor. The design of the experimental set-up can be presented in Figure 1. The device used in the pyrolysis of PCMW contained of batch reactor completed of 14 cm inside diameter and 28 cm outside diameter and carbon steel of 8 cm length. A k-type thermocouple with digital temperature recorder associated to the reactor was used to estimate inside heat of the reactor. This process was directed for variety of feed size and temperature. The PCMW are shredded into four different sizes which are fed to the reactor. The heat, need for the pyrolysis, supplied by the heater. The heat is supplied in continuous basis and vapour forms in the reactor. Before beginning the trial, the reactor was expunged by flowing N2 gas for 5 min to eliminate air inside. The condensable pyrolytic liquid products or wax were collected through the condenser and weighed. At the vent of reactor, a condenser was devoted to condense the vapours coming out of it. These condensed vapours are collected in a vessel as the liquid product where there is specific quantity of non-condensable vapours which are just left out inside the reactor was weighed. After pyrolysis, the solid residue left out inside the reactor was weighed. Then the weight of gaseous product was calculated from the material balance. Reactions were carried out at different temperatures rang-ing from 80 to 300 °C.The schematic diagram of fixed bed pyrolysis plant is shown in Figure 1. 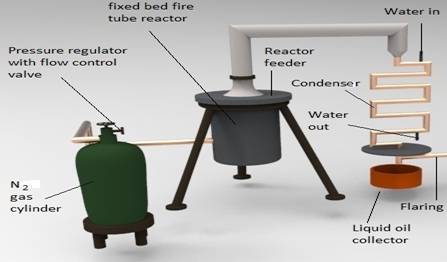 Elemental and Proximate Analysis of PCWM

The TG plots originate at heating rates of 10°C per min for the samples of PCMW are presented in Figure 2. It illustrations the alterations of fractional mass-loss (TG curves) with respect to pyrolysis response temperature T for 10°C per min heating rates for PCMW. The reaction zones change to the upper temperature states and the peak elevations escalation with the increase of heating rate. 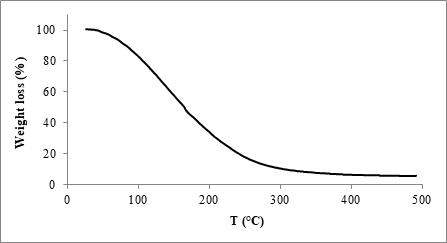 Effect of Temperature on Pyrolytic Yield

Pyrolysis of PCMW in batch type fixed-bed reactor, the experimentations was directed in the temperature range of 80 to 300°C. The investigations were directed to detect the significance of pyrolysis temperature on yield. 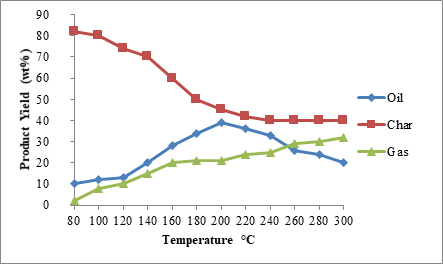 At diverse temperature of numerous feedstock sizes (0.65, 0.975, 1.30, and 1.95 cm3), there were achieved three types of pyrolysis yields such as liquid oil, solid and gas are presented in Figure 3 for feedstock (1cm ×1cm×0.65cm) due to straightforwardness. It is stated from the figure that when the escalation of temperature occur, the rate of liquid manufacture augmented up until it attained a maximum value and formerly reduced. All the data denote alike nature. Among the 4 sample sizes, the excellent result was attained for the feed size of 0.65 cm3. When the temperature augmented from 80 to 200°C, the production of liquid augmented first from 10 wt. % to a maximum value of 39 wt.% and then reduces to 20 wt.% at a temperature of 300°C. The gas production augmented from 2 to 21 wt. %% over the entire temperature range, whereas char yield declined from 88 to 40 wt. %, formerly remain residues were almost constant. It is pragmatic that a properly sharp optimum occurs in temperature at which supreme production of liquid was attained possibly because of strong cracking of plastic at 200°C temperature. The gas manufacture augmented over the whole temperature range to a uppermost value of 40 wt.% at 300°C, whereas, char yield decayed up to 220°C and formerly remained just about constant.

Comparison in Properties of Pyrolytic Liquid to Some Other Commercial Fuel

Note: - when medical waste convert into electrical energy then minimum 70% of energy lost as heat and other mechanical losses as utilized by electrical generator. So, 30% energy gets from the liquid oil. If researcher can use this vast amount of medical waste then it could be converted into electrical energy. There are many hospitals in our country. Researcher can produce an alternative energy source from this medical waste. The source of energy can met demand of our national electricity problem. So, writer has emphasis on this for the fulfillment the demand of energy.

Handling of medical waste is a challenging mission and also a mandatory feature for standard living. Recovery of electrical energy from PCMW by thermal pyrolysis was explored in the present issue quite effectively that added value to the energy sector. Around 22 medical service establishments produce huge quantity of plastic waste in Jessore city. Waste to Energy solves the difficulties of PCMW disposal while recovering the energy from this material with the important benefits of environmental superiority. The physical properties of pyrolystic oil attained were in the range of other commercial/ transportation and moderate quality fuels. It has been presented that a simple batch pyrolysis method can transform medical waste to valuable chemical products with animportant yield which differs with temperature. The electrical power generation prospects from the PCMW were estimated at 74448 KWh per year respectively. A counseling meeting should be detained with healthcare service providers, environmentalist, municipal authorities and waste handlers to choice suitable place and technology of manufacturing energy from PCMW.