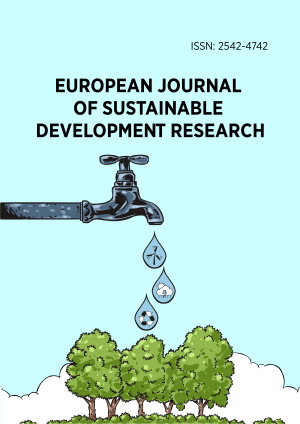 New technologies in the fuel injection system have improved the performance of the CI engine. Even though the biodiesel is universally accepted as a suitable alternate fuel for the CI (compression ignition) engine, there have been limited study reported on its utilization for single cylinder CRDI (common rail direct injection) engine. Use of biodiesel with diesel in a CRDI engine reduces proportionate consumption of diesel. In the present study, performance and combustion tests were carried out with the CRDI engine using the B20 blend of mahua methyl ester in diesel on volume basis called (B20 MOME). This study was conducted on a CRDI converted variable compression ratio engine with toroidal shaped cavity in the piston adopted. The tests were carried out at three injection pressures of 400 bar, 600 bar and 800 bar and for three injection timings of 15° BTDC, 20°BTDC and 25°BTDC, respectively. The results of the combustion and performance tests with the CRDI engine were compared with the performance of a CI engine at specified operating conditions with mechanical injection system using diesel as the fuel. The results indicated significant increase in the performance of the engine with increase of injection pressure. At 800 bar injection pressure, brake thermal efficiency of 29.98%, 27.61%, and 26.98% was attained at 15BTDC, 20BTDC and 25BTDC, injection timing respectively using B20 MOME.

There is increased thrust for use on renewable and nature friendly fuels in the compression ignition engines to cater to the solution to twin problems, such as source of energy and pollution control. The ability of biodiesel to mix with petrodiesel at any proportion without any additional processing puts an edge over other alternative fuels for the CI engine. Its advantages in terms of renewability, reduced problem to the environment and opportunity to improve the economy and revive environment, has encouraged the researcher to work further more on this fuel. Biodiesel in CI engines has proved for its increased combustion efficiency due to its oxygen content. The problem with higher viscosity and the density of biodiesel has restrained its use in the CRDI engine. Extensive studies on the performance of blends of mahua biodiesel on CI engine have been publicized. Puhan et al. (2009) reported lower ignition delay and higher peak pressure at higher injection pressures with mahua methyl ester compared with diesel. Matching combustion duration was reported at all injection pressures. Mohan et al. (2014) reported the performance at various nozzle opening pressures (NOP) (225, 250, and 275 bar) and static injection timings (19°, 21°, 23°, 25°, 27° BTDC) and stated stringent emission norms can be attained with B20 mahua bio-diesel without compromising the performance against diesel. Nanthagopal et al. (2016) reported that increased brake specific fuel consumption of a C. inophyllum methyl ester fuelled engine had been reduced to a great extent with higher injection pressure.

Recent developments in the CI engine fuel injection system have raised opportunities' to enhance its performance by controlling the different injection parameters of the engine. The state of air in to which the fuel injected, changes as fuel injection timing is varied and effects ignition delay. The fuel injection rate, fuel nozzle design, and fuel injection pressure effects the characteristics of the fuel spray and its mixing with air in the combustion chamber.

The variation of injection timing had a pronounced effect on performance and emissions.

From the exhaustive literature survey carried out on the feasibility studies of high pressure injection biodiesel engine operation and their blends, limited work has been reported. Further the effect of combustion chamber on the biodiesel blended fuels usage in CRDI engines has not been investigated. Also, studies on single cylinder CRDI engine fueled with B20 MOME and effect of combustion chamber shape on the engine performance has scantily been reported. Hence the objective of the present work is to determine the optimized parameters in terms of injection parameters (IT, IOP) and combustion chamber shapes for maximized CRDI engine performance with B20 MOME.

EXPERIMENTAL SET - UP AND METHODOLOGY

Fuels Used and its Properties

Madhuca indica, commonly known as mahua belonging to the sapotaceae family has been used as the base feedstock in this study. B20 MOME (20% blend of mahua methyl ester on volume basis with diesel) has been used as the fuel. The basic properties required for the study such as calorific value, viscosity and density were determined as per the ASTM standards. The properties are as shown in Table 1.

The conventional diesel engine has hemispherical bowl (HCC) in the piston. The toroidal shaped bowl was obtained by modifying the existing bowl keeping the same bowl volume as that of the HCC. The shape of the cavity was modified with larger bowl entrance diameter without altering the compression ratio of the engine. The modified shape of the piston cavity is shown in Figure 1. 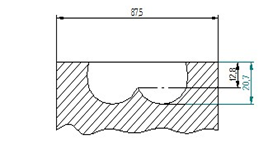 Experiments were carried on two similar engines with the same specifications and rated power, but with different types of fuel injection systems. Figure 2 shows a schematic diagram of the CRDI engine test rig. The engine test rig is fully instrumented for measuring combustion pressure, load on engine, mass flow rate of fuel and air flow rate. In the first phase, the experiments were conducted on an engine with CMFIS (Cam operated mechanical fuel injection system) using diesel as the fuel under standard settings of the engine with a hemispherical cavity in the piston at rated load. The performance and combustion results of these experiments with diesel were considered as a basis for comparison. In the second phase, the experiments were conducted on a CRDI engine with a toroidal shaped cavity in the piston without altering the engine specifications. The experiments are carried out at three injection pressures, 400bar, 600bar and 800 bar. Maximum injection pressure was limited to 800 bar, due to knocking in the engine. The results such as brake thermal efficiency, exhaust gas temperature, net heat release rate and peak pressure were obtained from the results. The injection timing was of 15°BTDC, 20°BTDC and 25°BTDC. Beyond these injection timings the performance deteriorated. The mean values of the results were used for discussion. The specifications of the engine and injector are given in Table 2. 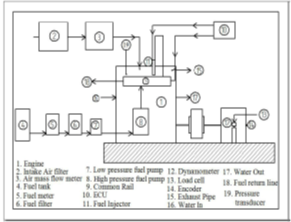 The performance characteristics of an engine were evaluated based on the BTE since injection pressure and timing are the influencing factors that establish the energy conversion efficiency of the engine. The results at rated load are discussed in this section. 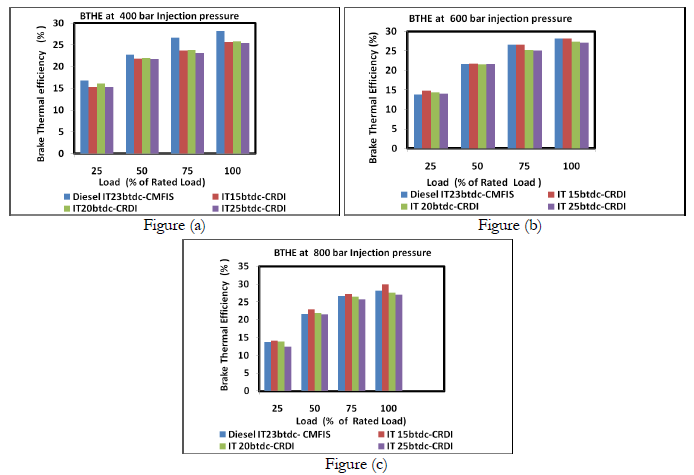 Figure 3(c) shows the comparison of the brake thermal efficiencies between a CI engine with diesel as fuel and CRDI engine with B20MOME as fuel at 800 bar injection pressure. At 800 bar injection pressure and 15°BTDC, the brake thermal efficiency exceeded the BTE of the CI engine with CMFIS powered with diesel as fuel. The brake thermal efficiency at three injection timings of 15°BTDC, 20°BTDC, and 25°BTDC were 29.98%, 27.61% and 26.98% respectively. The size of the droplet plays a basic role in the rate of the combustion process. The rate of the fuel evaporation droplets is proportional to the surface area of the drop. At higher injection pressure, better atomization of the fuel lead to better entrainment of fuel with air and evaporation of the fuel and its ensuing combustion in the gaseous phase. The outcome of better mixing of air and fuel is increased combustion efficiency of the engine. Near TDC the air is compressed to higher extent than, at 25°BTDC and 20°degree BTDC. This might have lead to higher air temperature. These two factors have significant effect on initiating the combustion and maintaining combustion rate. 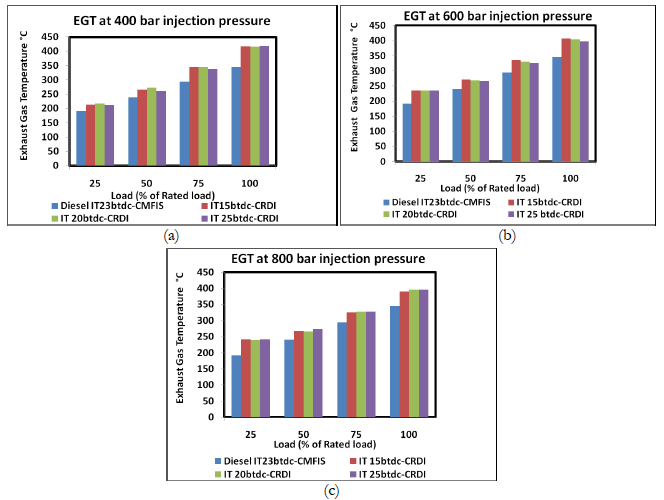 Combustion Characteristics at Rated Load on CRDI Engine with B20 MOME

Effect of Injection Pressure and Timing on Rate of Pressure Rise

Effect of Injection Pressure and Timing on Peak Cylinder Pressure

The experiments were conducted on CRDI engine powered with MOME (B20) at three injection pressures (400, 600, and 800bar) and three injection timings (15, 20, and 25 BTDC) at constant engine speed of 1500 RPM. The following conclusions were made on the performance and combustion characteristics of single cylinder CRDI engine facilitated with toroidal shaped piston using B20 MOME.

The authors extend their sincere thanks to the Director and Principal of St. Joseph Engineering College, Mangaluru for their support and encouragement to carry out this research work. The authors express their acknowledgement to Mr. S.S Mulae and Mr. Deepak Mulae, for providing the CRDI engine testing facility to conduct experiments at the Apex Innovations Private Limited, Sangli, Maharashtra, India.