The use of filler in rubber is almost as old as the use of rubber itself. As soon as rubber mixing machinery was developing, fillers such as ground whiting barites or clay were added to achieve low cost or high volume rubber products (Kalia et al., 2009). Zinc oxide, originally used for whiteness was the first ‘active’ filler. Generally, when a reinforcing agent is added to a base pure gum recipe, that agent impacts greater stiffness and high ultimate tensile strength that would be obtained by using an equal volume of a recognised filler. The major characteristics required of reinforcements is small particle size, toughening of the rubber and a decrease in solubility of the compound in solvents (Scandola et al., 2000). Combining a polymer with another material is often possible to obtain unique a combination or level of properties (Leelang, 1963) and these materials consist of two or more constituent phases that are combined at the macroscopic level and are not soluble in each other (Heinz-Hermann, 2000).

Nowadays, people are in search of materials that has high level of functional properties and can be used in multiple applications, hence the needs for the production of polymeric composites with high strength, stiffness, dimensional stability via embedding particles or fibers in the matrix (Linon et al., 1999). There still exists the urgent need for polymeric compositions with unique process ability, performance and recyclability properties as exhibited in polyolefin with modification by the introduction of renewable polymers such as wood or bones. Recently the interest in using natural fibres in bio-composites have grown tremendously because they are light-weight, combustible, non-toxic, low cost, easy to recycle and environmentally friendly (Kamel, 2007; Orts et al., 2005). The use of agricultural by-products as fillers in polymers is gradually taken it position in the polymer industries (Ahmedna et al., 1997). Agricultural by-products tends to absorb water due to their hydrophilic nature, and swell considerably and ultimately rotten through fungi attack (Eichhom et al., 2001). Carbonisation of the bio-material is done with the aim of curbing this short coming. In carbonisation, organic materials (such as wood) is subject to high temperatures leading to their breakdown and yielding carbon or carbon-rich residues for multiple applications.

Several studies have evaluated different types of industrial materials and agro by-products as sources of fillers in the improvement of the properties of rubber vulcanisates. For non-agricultural fillers, Ali (2018) evaluated the use of sediment dust nanoparticles and white cement as fillers in natural rubber vulcanisates. Best ratio of the sediment dust here was 2 – 8 wt% while it was 0.2 wt% for white cement. Ansarifar and Sheikh (2018) evaluated the use of kaolin as reinforcement/fillers in the natural rubber vulcanisates. Other non-agricultural fillers studied included nano-clay (Jayaraj et al., 2017), Ferrite (Krishnan et al., 2015), limestone (Moonchai et al., 2012), kaolin clay (Ogbebor et al., 2015, Sheikh, 2017) and a host of others.For agro-based fillers, Mansor and Che Ali (2016) evaluated the use of micro-crystalline cellulose and starch as bio-fillers in rubber. Moonchai et al. (2012) considered the use of defatted rice bran, Oyetunji et al. (2018) utilised un-carbonised particulate cow bone while Ugbaja et al. (2016) evaluated the bark of camel’s foot (Piliostigmathonningii) tree as fillers. Al-Ghamdi et al. (2018) considered synthesised magnetite in a hybrid filler system with activated carbon in natural rubber vulcanisates. Pandian and Govindan (2015) investigated how filler loading of carbon black alone affected the mechanical properties of the rubber vulcanisates. Surya et al. (2015) studied the effect of alkanolamide loading on carbon-black filled natural rubber. Though studies have been done to evaluate different types of materials (such as carbonised biomass) in a variety of approaches (such as in binary and ternary filler systems), there has been no investigation on the effect of some of the important process parameters like carbonisation temperature on the final property of the material obtained (within the scope of the authors’ search). This study is an attempt to fill in this very important knowledge gap.

Carbonisation of fillers used in this study was done using a laboratory muffle furnace with the temperature regulator set at \(600\ and\ 700\ \). An inert environment was created via the passage of nitrogen gas for the entire period of 3 hours of carbonisation. The un-carbonised wood-flour was washed in water and dried in air to remove sand particles and moisture respectively. The sample was then milled to fine powder as well as the carbonised portion, and sieved through \(75\ \mu m\) mesh. The sieved sample (wood-flour) was collected and used for compounding.

Determination of Moisture Content: The moisture content of each filler sample was determined by adopting the method described in ASTM D1509 at\(\ 125\ \). This method was used to determine the percentage of water in the sample by drying it to a constant weight. The moist sample was weighed and recorded as initial weight of sample; the wet sample was then dried to a constant weight at a temperature of \(125\ \) in an oven. The sample was allowed to cool, reweighed and recorded as the final weight of the sample. The moisture content was determined by equation 1.

Determination of Loss on Ignition: Loss on ignition refers to the mass loss of a combustion residue whenever it is heated in an oxygen atmosphere to high temperatures. The loss on Ignition of the various samples was determined gravimetrically, in accordance to the procedure described in ASTM D7348. \(10\ g\) of the sample was place in a tarred, pre-ignited crucible and placed in a furnace for about 2 hours. It was removed from the oven, cooled, weighed and again returned into the oven, heated until the weight remained constant.

Determination of Bulk Density: Bulk density of the various samples was determined by the tapping procedure (Ishak and Baker, 1995). Accurately weighed samples were poured into a uniform cylinder of cross sectional area and were then tapped several times until there was no change in the volume occupied. This volume was then recorded and the bulk density calculated.

Determination of pH: pH of the carbonised wood-flour powder samples was determined using ASTM D1512 method by immersing \(1.0\ g\) sample in \(20\ ml\) of deionised water in a \(250\ ml\) beaker. The mixture was stirred for 15 minutes and the pH meter was then inserted into the solution to obtain reading directly.

Processing of the Composites

This involves the compounding of natural rubber with carbonised wood-flour fillers in accordance with the formulation given in Table 1. For the values in Table 1, a batch factor of 2 was utilised.

Mixing: The Rubber amalgams were prepared on a laboratory size two-roll mill maintained at \(70\ \) to avoid cross-linking during mixing after which the rubber compound was stretched out.

Compound Curing: curing of the vulcanisates was done at a processing temperature of \(115\ \ \)and it lasted for a period of\(\ 8\ minutes\).

Mechanical Properties of the Produced Vulcanisates

Determination of Tensile Properties: The tensile test was conducted on a computerised universal testing machine. A dumbbell sample of known dimensions will be loaded into tensile grips of the tensometer and clamped into the two jaws of the machine with each end of the jaws covering \(30\ mm\) of the sample with the extensometer attached. The test begins by separating the tensile grips at a constant speed which depends on sample dimensions and can range from \(0.05 - 20\ inches\ per\ minutes\) and the target time from start to break recorded. Readings was read only when the sample under tension was broken, failed or ruptured. Newton force and extension was set initially set at zero (Ebewele, 2000).

Determination of Hardness: The Durometer consist of a 12.7 mm presser foot diameter and an operating stand with a mechanically controlled rate of descent and 1 kg mass centered on the axis of the indenter. The sample will be placed horizontally with its major axis and the area in which the hardness is measured uppermost and positioned directly under the Durometer indenter by means of V-block. The hardness measurements will be taken vertically (Sperling, 2006). The presser foot will be applied without shock until the full force will be in contact with the wheel and the sample surface. Readings will be taken at 5 seconds interval after the presser foot will be in contact with the wheel surface. The method covers rubbers in the range of 30 to 85 international rubber hardness degree (IRHD).

Determination of Compression Set: The procedure adopted for the measurement of compression set was based on ASTM-D358 using Wallace Compression Set machine. The test samples was cut to standard dimensions and compressed between parallel steel plates under stress of about\(\ 2.8\ MPa\). It was conditioned for a selected time of 24 hours at \(70\ \) after which the sample was removed and allowed to recover at room temperature for 30 minutes. The different between the original thickness of the sample and the thickness after test was recorded and expressed as a percentage of the original thickness (Asore, 2000) as shown in equation 2.

Determination of Flex Fatigue: A specified mean load which may be zero and an alternating load will be applied to the specimen and the number of cycle required to produce failure (fatigue life) will be recorded. The tests will be repeated with identical samples at various fluctuating loads. The loads may be applied axially in torsion or in flexure depending on the amplitude of the mean and cyclic loading. Net stress in the sample may be in one direction through the loading cycle or may be in the reverse direction. The measurement will be carried out in accordance to ASTM-D430 using the Flex tensometer machines, which function by including surface cracking of the rubber vulcanisates samples (Ebewele, 2000).

Determination of Abrasion Resistance: The original weight of test sample was initially measured and placed on an abrasive surface or abrader. A load was then placed on top of the abrader wheel and allowed to spin for a specified number of revolutions. Different abrading wheels was specified. A haze measurement as final weight was taken. The load and the wheel was adjusted for softer and harder sample material using equation 3 (Asore, 2000).

The bulk density of the un-carbonised wood-flour, \(600\ \ \)and \(700\ \) temperatures samples are presented in Table 2. Bulk density is principally influenced by the particle size and structure of the fibre. The lower the particle size, the lower the bulk density and therefore the better the interaction between the polymer matrix and the reinforcing fibre. This will thus enhance the vulcanisates processing and improve quality of the final product as desireable properties for fibre include excellent tensile strength and modulus, high durability, low bulk density, good mould-ability and recyclability (Ahmedna et al., 1997).

The pH of the powdered fillers as a function of carbonisation temperature are also presented in Table 2, it varied over a range of \(5.03 - 8.99\) for un-carbonised wood-flour, \(600\ \ \)and \(700\ \)temperatures. The results showed a progressive increase in pH from acidic to alkaline with increased carbonisation temperature. This is possible because residual materials were being lost on combustion, leading to the alkalinity. However, pH at acidic level tends to slow curing rate and hence reduce the cross-link density (Mohanty et al., 2001). 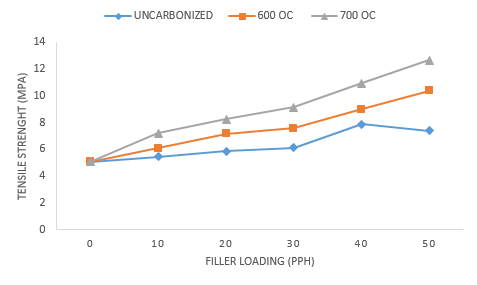 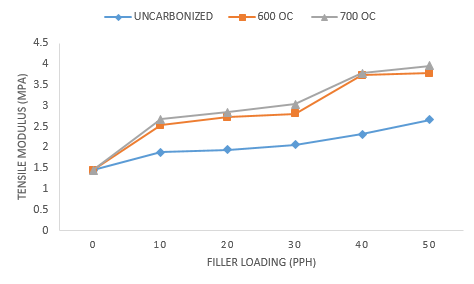 In Figure 2, the modulus increases with filler carbonisation temperature and loadings for \(600\ \ \)and\(\ 700\ \). The fact that \(700\ \) has a higher modulus, than \(600\ \) suggest that fillers are more reinforcing when properly adhered into the polymer matrix. Figure 3 also showed that elongation at break (EAB) decrease with increasing filler loadings and carbonisation temperature of the mixes for all the fillers. The decrease in EAB was as a result of adherence of the filler to the polymer phase leading to the stiffening of the polymer chain and hence resistance to stretch when strain is applied. 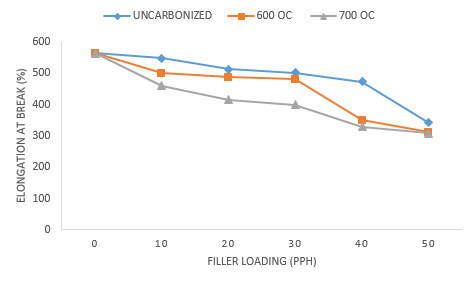 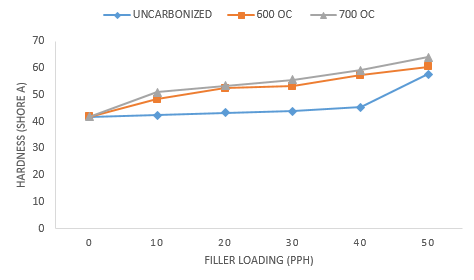 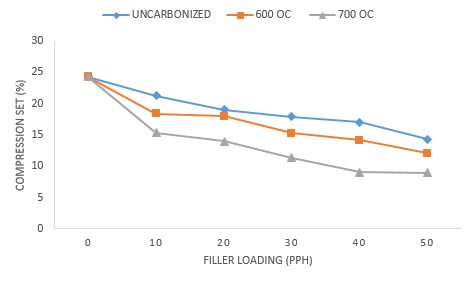 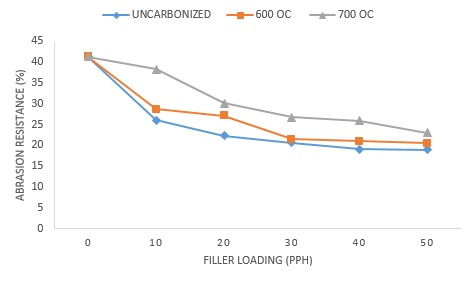 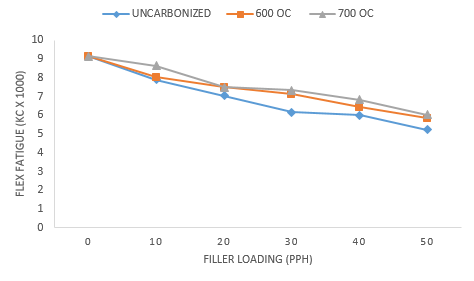