The study of engine performance under different fuel injection timing of a CNG direct injection engine was carried out in a retrofitted car engine. The experiment was performed on a 1297cc, 4-stroke, four cylinder SI engine having compression ratio 9. The base gasoline engine was converted into bi-fuel engine by installing both CNG port injection (CNG-PI) and CNG direct injection (CNG-DI) system in a single gasoline engine. The injection timing was varied from early injection (EI) timing at 220° BTDC to a late injection (LI) timing of 120° BTDC. The experimental study was limited by an engine speed upto 2700 rpm due to high thermal loading at higher speed. The results indicate that, the late injection timing 120° BTDC gives 10-12% higher brake power at a lower engine speed upto 1800 rpm as the volumetric efficiency is better at a lower speed. The optimal injection timing 160° BTDC produces higher performance over the entire speed range from 1200 rpm to 2500 rpm due to sufficient and optimum time available for preparation of CNG-air mixture. The early injection timing 210° BTDC gives very good engine performance for engine speed above 2700 rpm which accelerates better air-fuel mixing at a higher speed.

The use of CNG as a fuel in the transportation sector has been popular since last 10 years. It is also promoted by government for environmental concern and energy security (Aziz et al., 2010). The CNG is readily available having low density and high octane number (110-130) which produces less pollution as compared to petrol and diesel fuel (Liu et al., 2013). The CNG is a safer fuel because it can be operated at a high compression ratio and higher self ignition temperature (Jahirul et al., 2010). Most of the CNG vehicles use conventional technology as the vehicle is started with conventional fuel and then it is converted into CNG fuel. The main drawback of using CNG as a fuel in the engine is it gives poor performance in terms of brake power and lower thermal efficiency. Many researchers have conducted lots of research work to improve the overall engine performance using CNG as a fuel. The researchers have put their extreme effort to achieve optimal engine performance in terms of better output and least pollution (Kalam and Masjuki, 2011). As a result of that, various CNG injection technologies like single/multi point port injection (CNG-PI), sequential injection and most recent CNG direct injection (CNG-DI) have been developed (Patel and Brahmbhatt, 2014). In CNG port injection (CNG-PI), the mixture of CNG-air is formed in the common port in the air passage and then that mixture is going into the combustion chamber for burning by opening the inlet valve during suction stroke. In the sequential injection, four different gas injectors inject CNG just before the inlet valve near the inlet manifold and then mixture flowing into the combustion chamber. But in case of CNG direct injection (CNG-DI), the CNG fuel is injected directly into the cylinder by individual injector at the end of compression stroke just like a diesel engine and then it is mixed with the air in the cylinder itself. With CNG-PI system, the engine gives lower brake power and thermal efficiency due to lower volumetric efficiency (Kalam et al., 2009). The concept of CNG direct injection provides very good solution over the above difficulties but it requires certain modifications in the engine. The CNG direct injection system can increase the volumetric efficiency of engine and the engine can run with lean mixture results in a higher brake power with good thermal efficiency.

The injection timing greatly affects on the ignition characteristic of CNG-air mixture because it decides the mixture formation, turbulences and delay period. When the injection timing is varied in the CNG-DI system, the engine produces different outputs in terms of brake power and thermal efficiency (Zeng et al., 2006). The ignition and injection timing also affects on CO, CO2 and HC concentration in the exhaust emission (Hassan et al., 2010). Generally, the mixture formation is crucial with gaseous fuel because even at a high injection velocity, it produces low fuel penetration due to less mass density (Chiodi et al., 2006). In this research work, 1-3% error in the results may be considered due to thermal shock, calibration error and inaccurate crank angle phasing. The main objective of this research work is to investigate the effect of various injection timing on the performance and combustion behaviour of the CNG-DI engine. The engine speed was limited by 3000 rpm due to thermal loading aspect in this work.

The four cylinder SI engine was modified and converted into a bi-fuel engine using various components of CNG kit. The specifications of the test engine are listed in Table 1. Here the engine was subjected to some fabrication type of work to convert it into CNG direct injection. The cylinder head was modified by drilling 3-mm size hole from upper surface of head and that hole was projected upto the respective combustion chamber throughout. The four holes of 3-mm size were drilled from the upper surfaces of cylinder head to the respective combustion chamber upto the depth of 35-mm. Then, these four holes corresponding to their combustion chambers were subjected to reaming operation for their correct size of 4-mm diameter upto 18-mm depth from the upper surfaces of cylinder head. Further these four holes were tapped for their correct size of 5-mm diameter upto 6-mm depth from the upper surfaces. The edge of brass nipple of 5-mm diameter is inserted into the 6-mm size hole for individual cylinder and all four cylinders are prepared with this type of connection. The four flexible hoses were projected from all four nipples and other ends of these flexible hoses were connected with four different specially designed gas injectors of injector rail which was located near the throttle body. The injector rail was also connected with ECU through wiring. The gas injector rail was designed for 25-50 bar injection pressure. The other components of CNG kit such as pressure reducer, CNG tank, rubber coated brass hoses, solenoid valve, etc. were properly fitted at their appropriate location in the engine. The various sensors were also installed at different location to take data from exhaust, inlet and injector rail and controlling the various parameters through ECU. The computer was equipped with ECU through switch box and the computer contain definite program for controlling the various parameters. Initially, the engine was started with petrol fuel and then it was converted into CNG mode of operation. The digital weight meter was also used to measure the weight (in gm) of CNG fuel used by engine per unit time. The engine shaft was also connected with electrical dynamometer having rheostat loading. The cooling water was continuously circulated during entire operating condition of engine.

The variation of injection timing was applied by the computer program because it was directly connected with ECU through switch box. All other data such as cooling water temperature, exhaust gas temperature, air temperature etc. were seen on the computer screen. The injection timing was varied from 210° BTDC to 120° BTDC and taken various observations at 210° BTDC, 160° BTDC and 120° BTDC considering early injection, optimal injection and late injection respectively. The speed of engine was varied from 1500 rpm to 3000 rpm with an increment of every 300 rpm by keeping other parameters constant and the results were recorded. All the observations were taken twice to eliminate possible operating and calibration error. 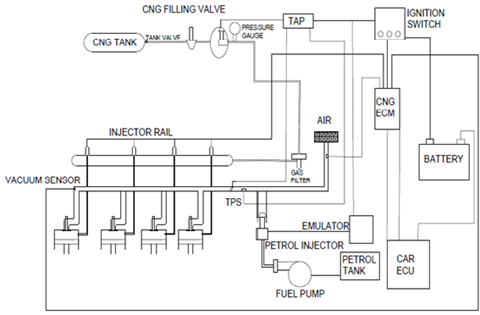 The air temperature inside the laboratory was about 30-35 C during different observations. All the observations were recorded after 2-3 minutes set time required for engine operating on a particular speed and load condition. 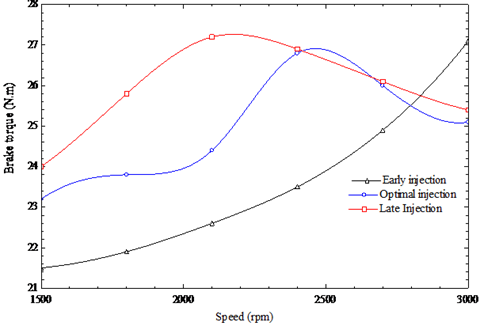 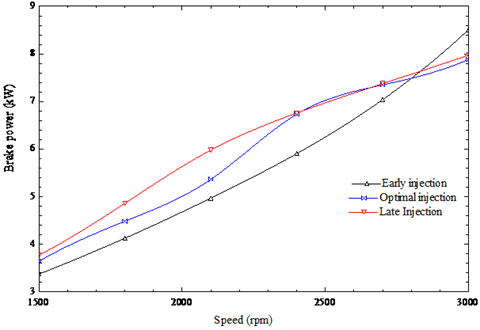 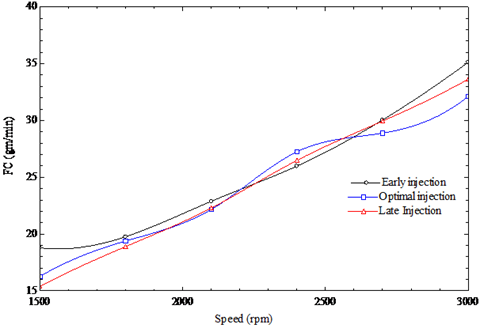 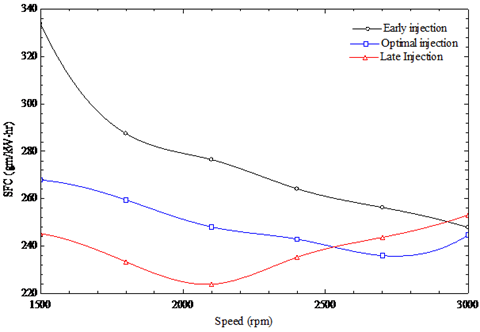 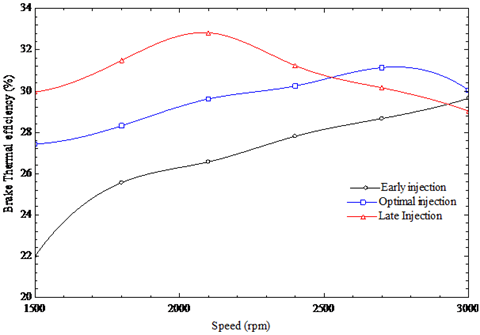 The following conclusions may be drawn from the obtained observations by experimental work: