CI engines are highly efficient in terms of fuel economy but emit more NOx and smoke emissions in the exhaust. Biodiesels can be used in CI engine as they have similar properties as that of diesel. However, biodiesels demands higher injector opening pressure (IOP) as they have higher viscosity compared to diesel. Use of biodiesel in CI engine addresses the scarcity of fuel but to meet the emission norms led by the authorities, it is necessary to use new concept which meets the legal limits of authority.

HCCI concept is the one to address both of them simultaneously. HCCI concept of combustion started during the late 1970 and this relatively newer concept employment in CI engine in commercial applications is due to its potential to achieve better BTE and lower emissions. In this concept, a homogeneous air-fuel mixture auto-ignites at number of places by compression alone when it reaches the chemical activation energy (Pucher et al., 1996; Furutani et al., 1993).

To avoid wall wetting (Iwabuchi et al., 1999), developed impinging sprays and found that spray angle of 80° was the most suitable with ITs of 40 to 60° BTDC and revealed that very high smoke opacity and high HC emissions and SFC.

Utilization of the heat energy contained in exhaust gases to vaporize the fuel and adjustment in valve overlap to get high internal EGR techniques were used and this work reported that high negative valve overlap (NVO) increased the combustion stability, low NOx and smoke at low loads and NOx increased at high outputs due to uncontrolled knocking combustion (Shi et al., 2005). Use of early in cylinder injection in HCCI engine operation revealed that engine was able to operate at lower brake mean effective pressure (BMEP) (2.1 bar to 4.3 bar) with low NOx emission and poor BTE but with high HC, CO and smoke emissions (Nathan et al., 2010).

The combined manifold and in cylinder injected HCCI operation was employed, where a homogeneous mixture was obtained by injecting maximum quantity of fuel into the intake manifold. The mixture was ignited by a small quantity of fuel injected directly into the cylinder and reported that both NOx and smoke emissions were better than ordinary diesel engine (Suzuki et al., 1997a; Suzuki et al., 1997b; Suzuki et al., 1998; Odaka et al., 1999). Employment of external mixture preparation device in HCCI engine operation at CR of 18 resulted in lower levels of NOx and smoke emissions with good BTE (Midlam-Mohler, 2004). Expansion of HCCI engine operating range using charge stratification revealed that the combustion becomes more stable but heat release rate (HRR) decreases and main HRR advances with large stratified charge (Berntsson and Denbratt, 2007). Supplying gasoline through intake manifold to control combustion and diesel fuel direct injection into the cylinder to initiate combustion showed that engine operating load can be increased to 12 bar indicated mean effective pressure(IMEP) with lower NOx and smoke emissions (Inagaki and Fuyuto, 2006). The characteristics and importance of heat transfer phenomena in combustion chamber walls were reported. Minimum correction coefficient for heat transfer correlations was determined theoretically under the same operating conditions. The study suggest that the proposed model could predict results better than Eichelberg’s heat transfer coefficient equation and Burnt’s specific heat ratio equation at all ignition timings with all fuels selected (Gürbüz, 2016). The utilization of after treatment devices plays very important role in decreasing emissions. But these can increase and decrease the CO2 emissions depending on the type of fuel and engine loads. The maximum fuel consumptions was more for biodiesel as compared to diesel. BDF100 was most sustainable at any engine load, with/without after treatment options (Caliskan and Mori, 2017). The effect of cetane number (CN) and ignition delay (ID) on the energy and exergy efficiencies of IC engine was studied. It is reported that a lower CN, a longer ID and a higher level of premixed combustion could increase the exergetic efficiency of a diesel engine (Tat, 2011). The speciﬁc fuel consumptions (SFC) decrease for all test fuels with increase in engine load. It was revealed that NO emissions increased with lower CO as amount of biodiesel in the test fuels (Uyumaz et al., 2014). Combustion duration (CD) and the cyclic variation in hydrogen run SI engine could be reduced with optimum swirling ﬂow. The combustion stability in hydrogen run SI engine is mainly dependent on cyclic variations in the ﬂame initiation period and the cyclic variations in this period can be reduced with controlled swirling ﬂow (Gurbuz et al., 2014). Ethanol has higher latent het of evaporation and octane number besides its higher ﬂammability temperature. These characters have better influence on the engine performance and reduce exhaust emissions. Engine torque increase with lower SFC was observed with the ignition timings (Calam et al., 2013).

From the detailed literature review undertaken it was observed that scanty work on low temperature combustion studies using renewable fuels like biodiesel has been reported. Hence the objective of the present study is to evaluate performance of HCCI engine fueled with Ceiba Pentandra Oil Methyl Ester (CPOME) using different coolant and intake charge temperatures.

Therefore, an attempt has been made to evaluate the performance of HCCI engine with different operating strategies.

First Stage: In the first stage 2000 ml of raw CPO is heated up to 105°C in a round bottom flask in order to remove the moisture content. Then the oil sample is titrated against NaOH solutions to calculate Free Fatty Acid (FFA) and it was about 8 %.

Second Stage: In the second stage 1000 ml of moisture-free CPO is heated to 60°C and then 150 ml of methanol & 1.5 ml of sulphuric acid are added to the oil. The obtained solution is stirred vigorously using magnetic stirrer at 450 rpm for approximately one hour. Then the solution so obtained is then allowed to settle for about eight hours and the top layer which contains acid is removed. Residue oil is tested for FFA and it was about 5.6%. Since the value was higher than required, the above procedure was repeated until the FFA value was 2.8%.

Third Stage: In the third stage the residue oil is heated to a temperature of 60 °C. 100 ml of methanol and 7.6 grams of NaOH are added to the residue oil. The resulting mixture is maintained at the same temperature and stirred at 450 rpm. After 90 minutes, the mixture is transferred to separating funnel for settling under gravity as shown in Figure 1. After eight hours, heavier part glycerin which settled at lower level is separated out to obtain methyl ester of CPO which is further washed with water for 3 or 4 times with a solution containing 10ml of acetic acid and hot water to remove moisture and other sediments to obtain clean CPOME. The biodiesel yield per 1000 ml oil was found to be 890 ml or 89%. 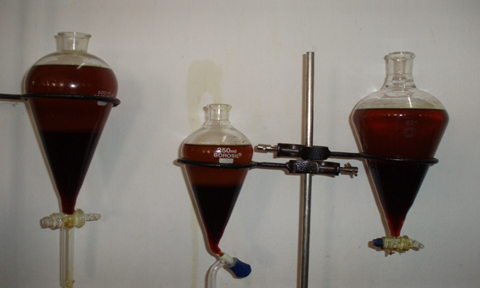 The properties of CPOME was determined in the fuel testing laboratory and summarized in Table 1.

EXPERIMENTAL SET UP AND METHODOLOGY ADOPTED

Manifold Injection of Diesel and Biodiesel

The conventional diesel engine was suitably modified to operate in HCCI mode. Air-preheater was used to supply hot air and manifold fuel injection facility developed in house was used to inject diesel and biodiesels with a pintle nozzle at an opening pressure of 100 bar for diesel and 130 bar for the biodiesel respectively at IT of 40°ATDC that is during the suction stroke. A separate inline injection facility that operates with the help of cam shaft was developed in house. This facility provides an opportunity to set IT at any desired value with external mechanical arrangement developed. Actual start of fuel IT was obtained with the help of a needle lift sensor. The engine was always operated at BMEP of 2.5 bar (50% load). The coolant temperature was controlled by varying the water flow rates with the help of a flow control valve. The temperature of cooling water was measured with the help of thermocouples. The experimental set up for HCCI engine operation fuelled with diesel and biodiesels is shown in Figure 2. Table 2 shows the specification of the engine used. Specification of smoke meter is given in Table 3 and the specification of exhaust gas analyzer is given in Table 4. Exhaust gas analyzer and Hartridge smoke meter were used in order to measure HC, NOx, CO and smoke emissions respectively. The effect of charge temperature on emissions and performance characteristics of HCCI engine was studied. 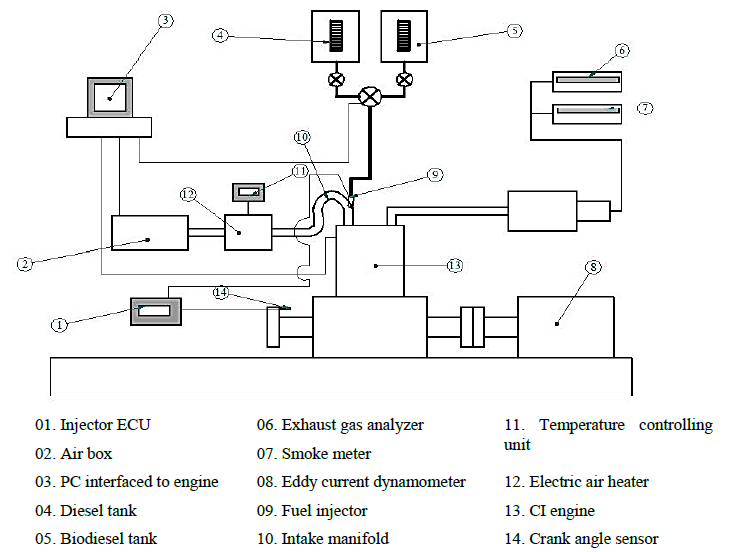 The accuracies of the measurements and the uncertainties in the calculated values of each parameters of the current investigation are shown in the Table 5. In order to minimize the errors of measurements five readings were recorded and averaged out results are only presented for the analysis. All the measurements of physical quantities are subject to uncertainties and were estimated as below:

Brake thermal efficiency is given by

Table 4 provides the uncertainties calculated for the parameters on performance, emission and combustion. Uncertainty values for all the parameters are within 3% and are acceptable for the analysis presented.

This section discusses the results of the experiments carried out using diesel and biodiesel in manifold assisted HCCI mode of engine operation. 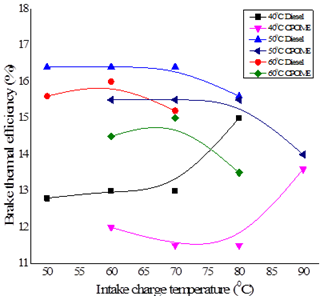 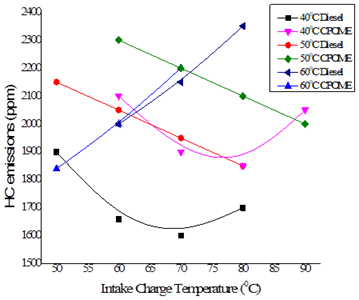 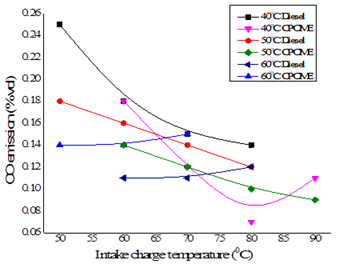 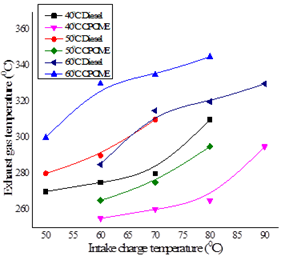 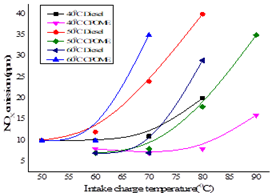 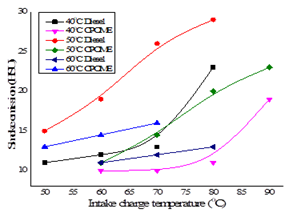 The account of energy supplied to charge heating is not considered in the calculations of the heat release. Figure 9 shows the variation of heat release rate with crank angle for diesel, CPOME fuelled HCCI engine for optimized conditions of intake charge temperature of 70°C and a coolant temperature of 50°C. From Figure 9 it follows that the properties of the injected fuels resulted in two HRRs that is cool flame HRR and main combustion. The cool flame HRR occurs between at 332-340°CA and a small amount of heat energy released was found for a crank angle about 10°. Main combustion occurred between 348-355°CA. Diesel fuel has higher calorific value compared to its counterpart to CPOME and hence higher premixed combustions were obtained for these fuels. The biodiesel resulted in increased diffusion combustion phase as the BTE associated with these fuel combinations were lower. 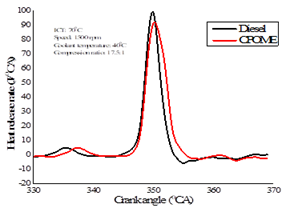 Figure 10 shows the variation of pressure with crank angle for diesel, CPOME operated HCCI engine for optimized conditions of intake charge temperature of 70°C and a coolant temperature of 50°C. Diesel has higher calorific value compared to its counterpart biodiesel and hence higher peak pressure is obtained. The lower calorific value and higher viscosity of biodiesels resulted into lower peak pressures. 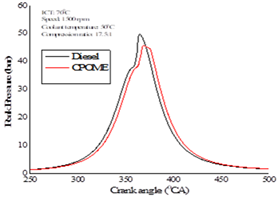 The experiments were performed on a modified single cylinder four stroke CI engine operated in HCCI mode with injection of diesel and biodiesel through intake manifold at 50% load. The air preheater was employed to heat the intake air and the temperature varied from 50 to 80°C for diesel and 55 to 85°C for biodiesel. The coolant temperature was varied from 40 to 60°C for all the fuels. For the comparison purpose, CI engine fuelled with diesel was operated at the IT of 23 °BTDC, an injector opening pressure of 205 bar, compression ratio of 17.5 and engine speed of 1500 rpm. From the experimental studies on manifold injection assisted HCCI engine fuelled with diesel and CPOME, the following conclusions are drawn under the above operating conditions: