This study reports the production of biogas using poultry manure and banana peels as a co-substrate, the experiments were carried out in a 20 litre biodigester and incubated for 50 days at mesophilic temperature of 34oC and pH of 6.8. The results show that the production of biogas began on the 10th day with a yield of 1.90 ml and increased continuously to the 20th day with an optimal yield of 17.30ml. Then, the yield decreased for the remaining period but did not cease till the 50th day. Kinetic models were used to compare biogas production at the ascending limb and the exponential and first order kinetic model had a better correlation and fit.

Over the past fifty years, the world relied on fossil fuels for energy which is a major cause of environmental pollution and climate change thus leading to the search of alternatives sources in recent times (Ekpo & Thomas, 2007; Imam et al., 2013). Nature’s stores of fossil fuels are drastically being depleted and cannot be regenerated and the indispensable role played by energy in the development of mankind cannot be overemphasized. In a bid to proffer solution to these challenges attempts is continuously been made to generate energy that is environmentally friendly and ecologically balanced from solar, wind, hydro, biomass etc. that require huge economic value and technical power to operate. The use of biogas energy could be the one and only reliable easily available and economically feasible source of alternative and renewable source of energy which can be managed by locally available sources and simple technology (Anushiya, 2010; Budyono et al., 2010; Kaygusuz & Kaygusuz, 2002). Sources have revealed that the largest underutilized resources for biogas production are found in agriculture and it is regarded as cheap and clean (Jorgensen, 2009; Wilawan et al., 2014; Win & Vandamme, 2009). Handling of poultry manure and plant waste such as banana peel, plantain peel and saw dust pose a threat on the environment and has generated great pressure in many parts of the world, if not disposed properly can cause adverse environmental and health problems . Accumulation of these waste on large disposal site have posed a problem by releasing methane to the atmosphere which is powerful green house gas , also the burning of fossil fuels contributes negatively to the climate leading to catastrophic events such as storms, droughts , sea level rise and floods which is heavily being felt across the world (Budyono et al., 2010). Researchers has over the years developed biogas from various agricultural waste ranging from forage grasses, roots and tubers marine species, cattle paunch, cow dung and poultry droppings and water hyacinth (Ezeoha & Idike, 2007; Gunaseelan, 1997; Kivais & Mtila, 2005; Kumar, 2005; Maile & Mucunda, 2014; Raposo et al., 2012; Singhal & Rai, 2003; Yeole & Renade, 1992) but not much has been done on the reaction kinetics of biogas production and analysing the process via kinetic models which reduces additional costs for continuous and repeated experiments in process selection and encourages its rapid comparison. Modified Gompertz plot has been used by (Ghatak & Mahanta, 2014; Latinwo & Agarry, 2015; Matheri et al., 2016) to simulate biogas production from pig waste and grass clippings, and cow dungs with plantain peel respectively and it had better correlation than the linear model. hence, the need to further analyse biogas yield using linear, exponential; zero, first and second order kinetic models to ascertain its optimal production with a better fit. This research aims at adding value to these wastes by assessing the production of biogas and its optimal yield from poultry manure and banana peels by evaluating the effect of retention time on the biogas yield and establishing the kinetic model of the process.

First and second order kinetics was used to test the liner model of the equation after the kinetics of the biogas production was banana peels modelled using linear and exponential equations.

The first order kinetic model is stated as

The second order kinetic model is stated as

With respect to the linear equation, the rate of biogas production is directly proportional to time,

On the exponential equation, the rate of biogas production increase with the digestion time,

Poultry manure used as the main substrate was obtained from a nearby farm in Enugu and banana peels used as co-substrate was obtained from banana plantation in Enugu. A 20 litres plastic container with dimensions (base: 400mm X 230mm; height: 275mm) served as the digester, a 10 litres transparent plastic served as the water collector, a 20 litres plastic keg filled with water to the brim and rubber hoses about 1 meter in length and 7mm inner diameter was used to convey gas from the digester to the water tank then to the water collector, the weighing balance, pH meter, measuring cylinder, gas measuring device and thermometer.

0.5 kg Poultry manure and 1 kg of banana peels as the co-substrate were mixed together in a container. The mixture a banana plantation was prepared by adding water to the substrate in a ratio of 1:2, for the substrate and water respectively and stirring to ensure homogeneity of the mixture before it is introduced to the digester, the cork of the plastic container was used to seal it properly to allow anaerobic digestion to effectively take place, the pH and temperature of the digester was maintained at 6.8 and 34oC respectively, gas pressure from the digester causes a variation in the water level of tube indicating a displacement and showing bubbles of gas rising to the top of the measuring tube. The biogas produced was monitored and recorded from ten to the fiftieth day in the experimental set-up. The method of gas collection is the water displacement method following Archimedes principles of floatation.

Table 1 and 2 presents the proximate and ultimate analysis of the poultry manure and banana peel respectively, the ash, fixed carbon and moisture content falls within range for a good digestibility performance, According to Hills and Roberts (1981), and Latinwo and Agarry (2015), maximum performance of an anaerobic digester using diary manure as substrate is usually obtained if the C: N ratio of the feed mixture is between 25 to 30:1, the C:N ratio of poultry manure was calculated to be 12.30:1, whereas that of banana peel was 21.1: 1, hence falls within specification.

A plot of biogas yield as a function of time was shown in Figure 1, from the graph, the biogas production started on the 10th day and increased continuously up to the 20th day, and this coincides with the exponential phase with an optimal biogas yield of 17.30 ml. Then the yield decreased continuously for the remaining period, which signifies that the substrate is depleted of nutrients (Skarstad et al., 2003). The increase in yield with time was observed from the 10th day to the 20th day of production, hence this research is focused from when the substrates starts yielding biogas till its optimum production analysed with a linear and exponential model shown below. 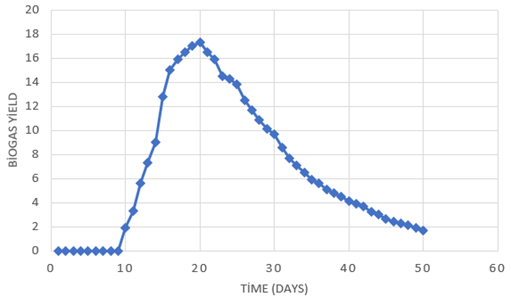 As presented in Figure 2 and 3, both models have a good fit but the exponential equation had a better simulation than the linear equation with a coefficient of determination of 0.969. 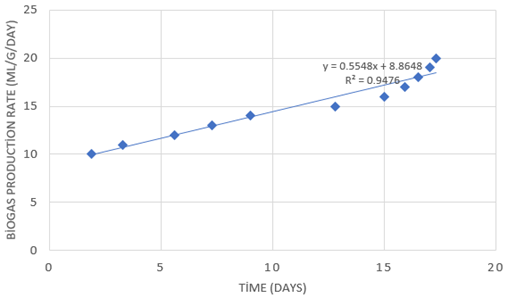 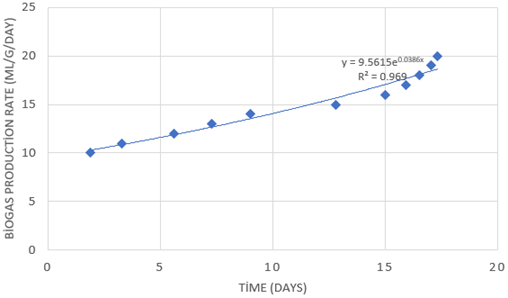 From Table 3, the linear equation was tested using the first and second order kinetic model, the first order gave a better correlation than the second order with both models significant.

Poultry manure and banana peel as a co-substrate offers an attractive raw material for biogas generation, with an optimal biogas yield of 17.30 ml on the 20th day, it kept producing till the 50th day at a minimal rate. Exponential plot simulated biogas production rate better and the reaction kinetics followed a first order type with a rate constant of 0.121 per ml per day.