The studied work presents the kinetics of the esterification of Free Fatty Acids (FFA) in jatropha oil with methanol (Alc) using glycerol based solid acid catalyst (SAC) at varying catalyst mass concentrations from 2.5 to 4.0 %, temperature 50-65 °C that is upto refluxing temperature and atmospheric pressure and Alc-FFA mole ratios ranging from 7.2:1 to 28.8:1 with respect to the FFA present in the oil matrix. The optimized esterification parameters were observed as 3.5% mass concentration of glycerol based SAC with 21.6:1, Alc-FFA mole ratio at temperature of 65 °C for a time period of 4 h which provided a conversion of about 97.03%. Based on the experimental results a second order kinetic model is proposed. The temperature influence on the rate of the reaction, Arrhenius constants and activation energies were evaluated. The reaction heat and energy of activation for the reaction were found to be 10.315 kcal/mol and 11.38 kcal/mol respectively.

In India, about 70% of the current oil demand for transportation sector has to be imported because India relies heavily on oil imports. Liquid fuels from renewable sources have been projected to be alternate sources of energy for petrol and diesel. To be precise, biodiesel is a promising candidate which has the ability to get going the energy supply with reduced oil imports. Biodiesel also known long-chain fatty acid methyl esters (FAME) is synthesized using renewable raw materials like plant derived oilseeds or fat from animal sources likepalm, canola, soybean etc (Antolin et al., 2002; Al-Widyan & Al-Shyoukh, 2002; Berchmans & Hirata, 2008). However, they being expensive and limited in sources, their application for biodiesel is sparce and hence prompted some researchers to focus on waste cooking, used oils and fats derived animals as feed for biodiesel preparation (Zhang et al., 2003). Tree borne oils like karanja and jatropha oils add value to biodiesel industry by projecting themselves as potential feed sources.

A pilot-scale fixed bed reactor was used by Lianhua et al. (2010), where acidity was reduced by 90.21%. Pasias et al. (2006) studied FFA esterification in plant based oils at 90-120 °C under pressure. Corro et al. (2010) esterified FFA in crude jatropha oil using SiO2 pretreated with HF as catalyst. Ni and Meunier (2007) used silica-based Nafion resin for the esterification of FFA in a batch and fixed bed-reactor and the results indicated equal conversions in both the cases. In addition, continuous flow reactions were performed by Tesser et al. (2010), Pirola et al. (2014) and Santacesaria et al. (2007).

A novel SAC was prepared using crude glycerol/glycerol/commercial glycerol and sulphuric acid (Prabhavathi et al., 2009) employing thermal treatment. The catalyst proved to be efficient as the -SO3H groups are successfully attached and possess good thermal stability with more hydrogen moieties which heightened the catalytic activity towards various chemical modifications and its reusability. It may possibly lead to the replacement of traditionally used homogeneous sulfuric acid, thus making the chemical processing industries green and economically more profitable, counteracting the effluent treatment as well. For the first time, kinetic mechanism of glycerol based SAC was performed and reported here for esterification of FFA in jatropha oil by studying the various esterification parameters like reaction time, temperature, catalyst amount and FFA/Alc ratio.

The objective of the present study is to determine the intrinsic kinetic parameters of the system namely solid acid esterification of FFA in jatropha oil with a view to contribute in the design aspects of a reactor system as a prerequisite for biodiesel preparation.

Jatropha oil was purchased from a near-by rice mill (Telangana). Methanol (99.5%) used in the experiments was of high purity grade and supplied by Sd. Fine chemicals, Mumbai (directly used without any pretreatment). AOCS Method (AOCS, 2003) was used to estimate acidity of the oil (Acid Value (AV)) which varied from 19.4 to 22.2. Conversion of the reaction was determined by estimating the drop in the AV of the starting material and the product by titrimetric analysis. The oil composition was found to be palmitic (16.8%), stearic (6.51%), oleic (37.74%) and linoleic (37.99%) as determined by gas chromatography (Christie, 1972).

The experimental procedure, execution of the experiments and the sampling protocol adopted in this study was similar to our previous work (Rani et al., 2013). For an experimental run, round 250 g of jatropha oil was contacted with 8.75 g SAC and 375 ml Alc at 65 °C at a constant agitation speed of 500 rpm. The experimental matrix comprised the following pattern,

The below eq. was used to calculate FFA conversion

where A initial is the starting material AV and A final is the AV of the final product.

The intrinsic kinetics of FFA esterification in targeted oil was established based a pseudo-homogeneous model (Rattanaphra et al., 2011). The model was considered to be significant enough to describe the esteriﬁcation of FFA with Alc in the presence of triacylglycerols using SAC. The reversible reaction of esteriﬁcation of FFA present in jatropha oil with Alc and SAC is given below:

The performance of the SAC for the esterification of FFA in jatropha oil was evaluated and the experimental data obtained was used to optimize the operating parameters like reaction time, temperature, catalyst concentration and methanol-FFA mole ratio.

The influence of agitation speed was examined from 100 to 500 rpm for the esterification of FFA with 21.6:1 Alc-FFA mole ratio, 3.5 % catalyst concentration and 65 °C. The FFA conversion was constant at different speeds of agitation shown in Figure 1, this signifies that the external solid-liquid mass transfer resistance is absent for the swaping of both reactants and products. Therefore, speed of agitation above 500 rpm reflected that effects of external mass transfer contributed negligible impact on the reaction. Henceforth, all the reactions further were performed at 500 rpm. 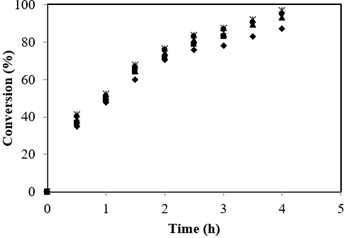 External mass transfer resistance absence was demonstrated by theoretical calculations. Mass transfer coefficients were used to calculate the mass transfer rate was calculated from which in turn were calculated from liquid phase diffusivities. DAB (FFA in methanol) and DBA (methanol in FFA) were calculated using Wilke-Chang equations and found to be 9.806 × 10-6 cm2/s and 4.463 × 10-7 cm2/s respectively. Sherwood number (Yadav et al., 2003) was enumerated to determine the solid liquid mass transfer coefficients kSLA and kSLB values as 1.96 × 10-3 cm/s and 8.92 × 10-4 cm/s. The surface area of the particles per unit liquid volume (ap) was estimated as 8.4 × 10-4 /cm. Conversion profiles were used to calculate initial reaction rate. An observed initial reaction rate was calculated as 9.18 × 10-7 mol/cm3/s. Hence, 1/\(r_{\text{obs}}\) is 1.09 × 106 s/cm3/mol.

Which summarizes rate of transfer of A and B from bulk liquid phase to external surface of the catalyst.

The following inequality is applicable in case of absence of external mass transfer resistance,

Thus, substituting the values in the above equations, it is observed that

Hence, it can be inferred that there is non-existance of resistance due to the solid liquid external mass transfer for both A and B.

Esterification reaction rate is very much influenced by reaction period. The optimization of the process parameters was performed at catalyst mass concentration of 3.5%, 65 °C, Alc-FFA mole ratio of 21.6:1. Figure 2 depicts that there exista a linear relation between conversion and reaction time. It was found that initially after 30 min of reaction 41.19% conversion was obtained and conversion steered with time and culminated at a maximum value of 97.03% in 4 h. However, no significant increase was recorded in the conversion upon increase in reaction time. 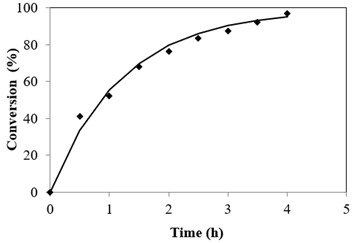 Catalyst loading plays a major role catalytic reactions. The influence of catalyst concentration on the FFA conversion was investigated from 2.5 to 4.0% based on FFA in jatropha oil to determine the optimum SAC load. Results indicated that with increasing catalyst quantity the reaction rate increased. Figure 3 details the profile of conversion with cumulative SAC concentration. The data shows that catalyst concentration of 2.5% gave a conversion of 79.5%, using 3% catalyst, the conversion was found to be 87.3% and increase in catalyst percentage to 3.5% gave 97.03% indicating that conversion, however no prominent change was observed on increasing to 4.0%. The changes in conversions can be explained by the fact that an increase in SAC quantity led to an increase in the number of active sites thereby increasing the conversion, hence the optimal amount of catalyst was found to be 3.5%. Many researchers used varying amounts of different heterogeneous catalysts based on the catalyst active sites. The present study is taken up to establish the concentration of the catalyst required keeping in mind the presence of large amount of triglyceride when compared to the FFA in feed oil.

Esterification reactions belong to the equilibrium limited regime. A quick glance at the stoichiometry of esterification reveals equal moles of reactants to yield equal moles of products. The equilibrium shift towards the direction of ester formation is attributed to usage of methanol in excess than is generally used. This leads to the overall increase not only in the rate but also pushes the reaction completion to completion (Tesser et al., 2010). The plot resulted by different Alc-FFA mole ratio on the FFA esterification at SAC concentrations of 3.5% is illustrated in Figure 4 at 65 °C. The influence of Alc to FFA on FFA conversions at various quantities of Alc i.e., from 7.2:1 to 28.8:1 were examined. It was observed that conversion was less for lower ratios of methanol to acid while conversion increased from 64.66% to 98.01% as the mole ratio increased from 7.2:1 to 28.8:1, the highest conversion was 97.03% at 21.6:1 mole ratio and further increase in methanol showed no significant change. 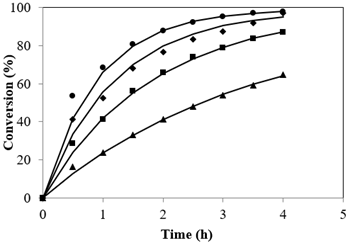 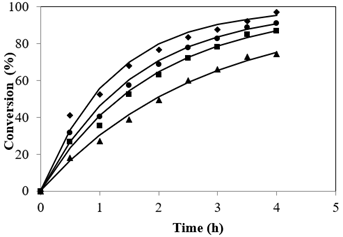 k1 was calculated from the initial rates method, At zero time, the starting products concentrations, CC and CD, is zero i.e. X =0, hence, Eq. [4] changes to, 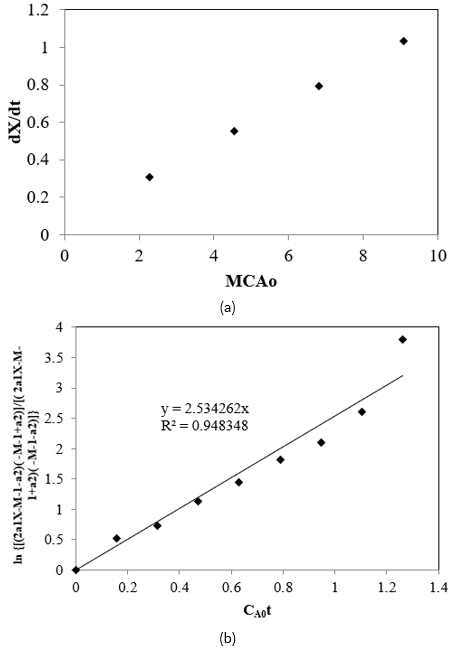 In the similar fashion these kinetic parameters were determined for each experiment (i.e., with varying temperatures and catalyst concentration) by nonlinear regression
. The estimated rate constant and equilibrium constants by nonlinear regression based on experimental data are listed in Table 1. Arrhenius equation was applied to study the temperature effect on the forward reaction rate by fitting k1 and k2 respectively,

The plot of ln k as a function of the reciprocal temperature as shown in Figure 7a. The frequency factor (A), and the energy of activation (∆E) were obtained as 2.76 x 106 and 11.378 kcal/mol respectively. van’t Hoff equation was applied to study the temperature effect on equilibrium constant, K,

The heat of reaction was 10.314 kcal/mol as obtained from Figure 7b which strengthens the endothermicity of the esterification reaction. An activation energy of 10.314 kcal/mol was obtained and is approximately similar to those found by Neji et al. (2011). 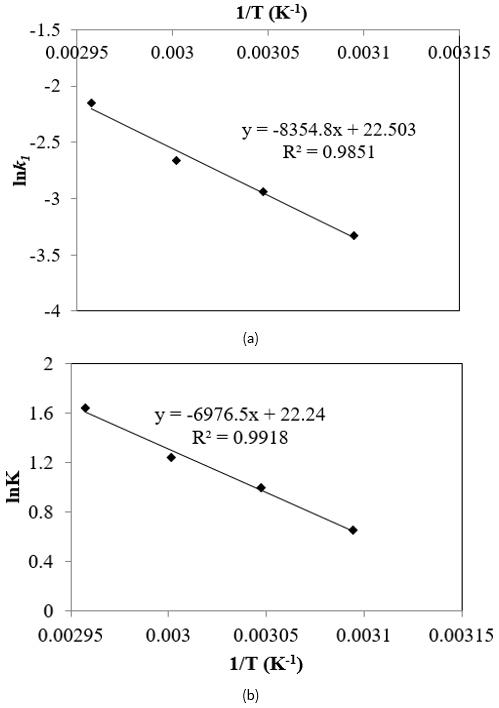 The experimental and calculated conversions from Eq. [8] displayed a ± 5% deviation as shown in Figure 8. Regression analysis by ANOVA shows a p-value of 0.00497 with an R2 value of 0.99 and adopted to be significant enough to profess the satisfactory nature of the reaction system based on the proposed model. 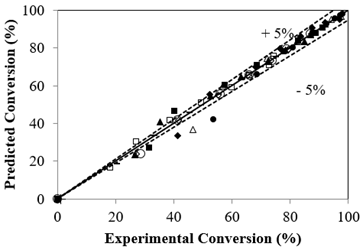 Experimental results show that FFA in jatropha oil could be effectively reduced to FAME by esterification with methanol, using 3.5% mass concentration of glycerol based solid acid catalyst with methanol/FFA mole ratio of 21.6:1, at 65 °C. A satisfactory relation was achieved between the developed model and experimental data prompting a satisfactory behavior of the developed model in explaining the study undertaken.

Our sincere thanks to Dr. R.B.N Prasad, Former Head of the Department, Centre for Lipid Research and Technology, CSIR-Indian Institute of Chemical Technology for the execution of this work.