Economic load dispatch (ELD) is a complicated issue, when renewable energy sources are also considered with thermal power generation systems. It becomes challenging and difficult to find the optimum solution at lower fuel costs, in order for generated power to meet the active power load demand. This paper primarily focuses on the modeling of ELD for solar power plants synchronized with Thermal power plants. In this paper, the purposed optimization method used is Genetic algorithm (GA). According to which, all thermal generators in the system will supply output power at lowest fuel rate however satisfying the system limitations. Minimum fuel cost of a generator will be calculated by using generator characteristic curve for all generators present in the system. With the help of GA, achievable range for best solution is attained while restricting the output power of thermal generators. Proposed system priority to achieve is solar at first and generators on second such that generator or combination of generators resulting in lowest cost will be on second priority. Simulations on various test systems were performed including one with six thermal generators and the other with six thermal generators and solar power system. By using MATLAB the proposed problem is simulated.

Due to Increase demand in electricity resulting from rapid growth, development and progress worldwide the electricity shortfall is increasing day by day. The main objective has now shifted to improve the efficiency and performance of the existing system along with to lower the cost of solution at the same time increasing the reliability of the power system. New conventional and non-conventional sources of electricity generation are now being installed in order to meet the ever increasing demands of electricity consumption.

As a result of rapid changes in the modern world, electricity shortfall is a major issue as in the modern day; economy of a country is entirely dependent on the energy consumption. As the existing conventional sources of energy are diminishing with time, search of wind, solar, biomass and other renewable energy sources is becoming more attractive for energy experts. For the proper working of a power system in order to ensure its reliability, electricity generation must be equal to the load demand. Hence, it is necessary to look for an optimum solution for thermal generators power output at their minimal cost of operation with minimum consumption of Diesel fuel, economic load dispatch technique is used. Solar being the cheapest source of energy with minimum operating cost is kept at first priority but due to its less efficiency (less - area to use full electricity conversion ratio) it requires a lot of free space thus limiting the overall size of the solar system. Further, the entire dependency on Sun, solar power system cannot be used as single primary source as the output of solar power system is highly variable which create a need for another secondary power source available at all the time.

All over the globe numerous studies and research works have been carried out to resolve economic load dispatch difficulties of the power systems (Shilaja and Ravi, 2017). Many different algorithms have been proposed addressing issues and problems related to economic load dispatch of stand-alone thermal power generation plant and their losses (Liu, 2010). The fuel curve of thermal generators and the use of quadratic, nonlinear and linear curves for the assessment of fuel cost of the thermal units has also been explained in this paper.

The basic purpose of this paper is to find economic load dispatch of the thermal power plants along with the synchronization of renewable energy source such as solar to the national grid which increase the overall complexity of the system (Khan et al., 2015).

Probabilistic distribution function from Gram-charier theory is used to solve the transmission line flows and for the analysis of the power system (Liu, 2010). In order to solve the solar power energy problem probabilistic optimal power flow is used (Safie, 1989).

An ELD problem comprising of thermal power generation units and solar power plant is considered in this paper. Since solar plant yield is entirely dependent on Solar Irradiance which is varying in nature and is different at different intervals of a day, as a result output from solar power plant is considered as a constraint in proposed economic load dispatch problem. Output from Solar power plant is taken at three different intervals of a day which include morning, evening and mid-day when solar power output is at its peak. By using genetic algorithm technique, a heuristic optimization method is used to find the best solution for the mentioned problem while satisfying all the system limitations. The results obtained by running MATLAB simulations clearly prove the usefulness of genetic algorithm while resolving the problems associated to economic load dispatch when renewable energy sources are combined with thermal generation units.

Due to massive increase in demand of electricity, energy crisis has reached to its maximum degree in all over the world in previous ten years. In today’s world the most difficult and important part in the interconnection of large generators in parallel in order to run the load economically and to full fill the load demands is planning and optimized working of generating units. For this reason optimized and timely switching of generating units is made possible to ensure maximum cost savings without affecting the load.

A thermal power generating unit mainly comprises of three major parts a boiler, a steam turbine and a generator. The first part of an energy conversion unit is a boiler in which fuel is supplied. This fuel can be in the form of diesel, gas, furnace oil, coal etc. Fuel is used to heat water present in the boiler to change it into super-heated vapor state. The amount of heat produced by the fuel depends upon the calorific value of the fuel used. These vapors go in to the steam chamber. Turbine is rotated with the help of vapors produced in the boiler. Steam turbine is further connected to a generator through a shaft (Gaing, 2013). Rotation of shaft result in the electrical output of generator which is then received and then transmitted through electrical wires to the load where power is needed.

If the input output characteristic curve of all the connected generators is same and identical to each other than load can be symmetrically divided on all the generators connected in parallel. However, in most cases this is not the case. All or most of the generators connected are of different brands, having variable efficiency and dissimilar input output characteristics. All these generators will also have different fuel cost curves at different power outputs as shown in Figure 2. It increases the need of ELD to vary the power of generating units within the desired generating limits of each individual generator to meet output power demand within optimal fuel cost (Safie, 1989). 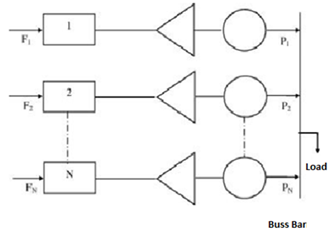 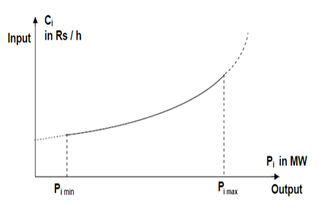 Genetic Algorithm founded by john Holland is used widely in many applications of engineering and related fields. The objective is to investigate & develop the mechanism, which can be introduced into the world of computers.

GA gives us an idea of the fittest solution present in a given population (Yu and Rosehart, 2012; Bakirtzis et al., 1994). It helps us to decide the best possible solution available out of number of options. With the help of GA chromosomes can be modeled as strings of 1s and 0s while clearly demonstrating how populations of these chromosomes can be evolved by implementing different techniques of mutation, selection and crossover which are found in natural sciences. This approach of GA starts from estimation of a given set of input variables and congregates to the best closest solution in a form of an inverted triangle. In next step a new population or a set of variables are created and the finest possible solution is formed base on the fitness level. In this way the best possible optimal solution from a given set of population in accordance to the environment for which they are best suited is chose.

The first step of genetic algorithm is to choose a best solution out of a given population for the purpose of reproduction. The best variable/solution is selected which will have highest probability to be selected in the next round for reproduction. Best variable/solution is referring to an individual’s ability in a certain environment. Members of population or different variables of a population compete each other on the basis of their qualities. The individual having best performance is selected for the next step. In this manner all the bad solutions are eliminated at the end of the process while keeping the population size fixed at every stage.

The most significant element in Genetic algorithm is crossover of species. Crossover function produces a new variable or an offspring by substitution of one or more bits of two parents. Combination of chromosomes takes place to form new specie. This process is called as recombination.

After completion of crossover of parentages, the process of mutation takes place in which a new generation is formed after randomly alteration of genes in order to establish different new traits. The genetic algorithm complete flow chart is shown in Figure 3.

ELD model consisting of thermal power generating units and a solar power system is used to reduce the operating and fuel cost of the power system without affecting the running load. The power output of solar system at different times is given in Table 1.

Output of Solar PV modules is varying in nature and is dependent on solar irradiation, temperature and several other factors such as soiling loses, dirt and wind velocity. Solar irradiance and ambient temperature are different at different intervals of a day and are a critical parameter for solar power production. In order to model the randomness of solar power, the probabilistic approach is used. Output of solar power is taken as a random variable (Gaing, 2013).

The system comprising of six thermal power generating units and a solar power system is taken under observation for this paper. With help of Matlab, ELD for the system under consideration is simulated. Table 2 shows the technical parameters and specifications of the six thermal power generators. Cost coefficient parameters of the thermal generators are denoted by \(q_{i2}\), \(q_{i1}\) and \(q_{i0}\).

The base of test system is 100 MVA. Minimum and Maximum output power also known as Generation limit (Bakirtzis et al., 1994) defining the inequality constraints of each thermal generator is presented in Table 3. The parameters of solar power plant are given in Table 4.

The different rated values of solar is considered, the value of rated power is 2.2 and 1pu. It is assumed that the output of solar power plant is changed at different time interval. Output of thermal generating unit is changed depending upon the load demand and instantaneous production of solar power plant. We have taken total of fifty iterations for Genetic Algorithm. The crossover probability used is 0.9 and mutation probability used is 0.01. For the stated issue, the ideal solution is given in Table 5 and 6 for rated solar plant 2.2 pu and 1 pu.

For all these three cases, at rated solar power of 1pu, are shown in Figures 4, 5 and 6 respectively. 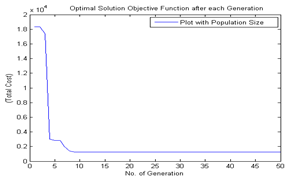 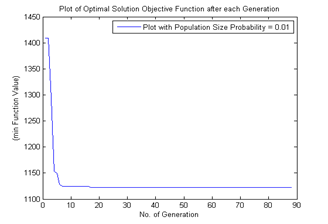 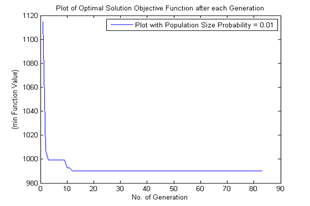