Changes in land-use and land-cover have negatively affected the hydrology of Ragati River. It is one of the many rivers in Kenya that are considered as hot spots due to over abstraction especially during the dry season. This study aimed at evaluating the effects of land use and land cover changes which are important in ensuring sustainable use of the water resource. This study aimed at achieving the following objective: i)To analyze land use activities and land cover changes within Ragati River catchment area from 1990 to 2010; ii)To analyze the discharge of Ragati River during low flow and high flow seasons; iii) To assess the response of the sub-catchment to land-use and land cover change; iv) To evaluate the measures taken to mitigate negative effects of land use and land cover changes on the Ragati catchment. Satellite data was integrated in GIS to examine the extent of land-use and cover change in the sub-catchment. Both quantitative and qualitative data were used in this study. Various data types such as socio-economic data, land-use data, rainfall data and river flow data were collected in order to supplement information from landsat images. Analysis was done using classified landsat images of 1990, 2000 and 2009. SPSS and Ms Excel were used to analyse descriptive data. This study revealed that between 1988 and 2000 the dense forest decreased by 15%, land under perennial crops increased by 4.26%, cropland increased by 11%, settlement increased by 45.30% while closed woodland decreased by 4.6%. The results also show some change between 2000 and 2009. This can be attributed to increased campaign on reforestation of Mt. Kenya forest. Land under perennial crops decreased by 57%, crop land further by 4.04%, settlement increased by 49.41% while closed woodland decreased further by 3%. Over abstraction of water and river bank encroachment are some of the causes of changes in the volume of water flowing in the river. This study recommends that water users should be made aware of the importance of sustainable use of the water resource.

Human activities are exerting too much pressure on fresh water resource and if this this trend is left unchecked, water resources whose demand is ever increasing will be depleted. Since the demand is higher than the supply, water scarcity has become a problem globally (Cosgrove and Rijsberman, 2000; Taha, 2007). Water scarcity is likely to increase in the coming years if awareness on sustainable water resource management is not created (Ayenew, 2007). Fresh water is used in activities such as domestic (drinking, cooking, washing and subsistence farming), industrial (Power generation, waste disposal treatment), agricultural (large scale commercial farming) and of leisure activities (kayacking, swimming). Water is an important resource for social and economic development. It is also important for maintaining a healthy ecosystem. As economic development increases to cater for the increasing world’s populations more allocations of water for the domestic, agriculture and industrial are needed (UN-Water, 2007). This has led to increased demand for fresh water which in return leads to increased abstraction of water from fresh water sources such as rivers.

Water resource is a basic need and also important in development and in reducing poverty (Förch and Thiemann, 2004). Water is one of the major current issues facing Africa. There is unequal geographical distribution and accessibility of water supplies from lakes, rivers and rainfall. Climate change can also cause pressure on water availability and accessibility. This is likely to be followed by an increase in water for irrigation to feed the extra number of people and water for generating power for the developing economies. There will be an increase in competition for water by the different water needs coupled with pollution. Ragati River has uncontrolled abstraction of water despite efforts by WRMA to allocate water through the system of permits and to enforce these permits (WRMA 2012). This study aimed at establishing how land use activities and land cover affect hydrology of Ragati River.

Malaki (2017) noted that the greatest impact of change in land use is the loss of bio-diversity in the region concerned. Transformations in the land use affects the environmental functioning in the short-term as well as in the long term. Malaki noted that destruction of the bio-diversity in the greatest challenge to changes in land use particularly when urbanization takes place. Erosion and land degradation are greatly manifested when urbanisation takes place as concrete jungle takes the place of vegetation and bio-diversity. This affects the sustainable development of the region particularly where no environmental assessments take place before changes in land use occur. The flora and fauna are permanently lost as well as other adverse effects that are resultant to changes in land use.

Bronstert, Hiehoff, and Burger (2012) noted that there was a growing concern on the recent urbanization in African states since it encompasses changes in the hydrological aspects of the region. With water shortage hitting most regions in Africa, there is need to analyse the changes in land use and resultant impact on hydrological elements. Water is a diminishing assets and thus when land use changes, the resultant effect on the hydrological states needs further analysis. The loss of vegetation and replacement with concrete building, the region which is greatly regarded as an important water tower in Mt Kenya region requires analysis. It is important to note that no single study has been carried out in the area to analyse the effect of land use activities on the land cover. Much of studies have concentrated on larger towns such as Thika, Naivasha among others. However, it is evident that changes in land use activities needs to be tempered to allow for mitigation to avoid loss of bio-diversity in many regions in Kenya.

This study employed experimental design. This research design was chosen because the research involved measurement of river discharge and calculation of land cover changes in the catchment.

The study adopted a stratified simple random sampling to select households in Ragati catchment. The sample size of the study was based on the total number of households in the catchment and was calculated using Yamane (1967) formula (1). The area has about 35217 households. This formula is best placed for qualitative studies like for the case of this study.

𝜂 is the sample size

Ν is the total number of people in the catchment

River Ragati is 55 km long and covers a region that fall within parts of Kirinyaga and Nyeri counties, Kenya. It found on the upper Tana catchment. It covers an area of about 250 km2. Ragati River originates from South West of Mt. Kenya forest. This part of the forest is called Ragati forest. It is found between 1800- 2500 m ASL. Its watershed lies between longitudes 37°06’E and 37°20’E and latitudes 0°20’S and 0°40’S. The total population in the catchment as at 2013 is 290, 428 persons. The source of the river is in Nyeri county while the mouth is in Kirinyaga county. The area has a river gauging station known as 4BB01 found at the confluence of Ragati River and Tana River in Sagana. The location of the river gauging station is latitude

0°01’S and longitude 37°19’E. The area has the following agro ecological zones: the upper highland zone that is made up of forest reserve and lower highland zone that is made up of tea zone, coffee zone and maize zone. The main land use activities in the area include agriculture, deforestation and settlement. This catchment has been chosen for this study because of its economic importance in the region (Figure 1 shows Topographical Map of Ragati River). 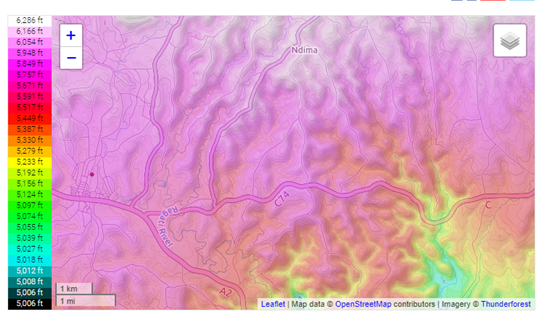 The study used stratified sampling where the area was stratified into three zones (upper, middle, lower) guided by agro-ecological zones. These zones include the upper highland zone that is made up of forest reserve and lower highland zone that is made up of tea zone, coffee zone and maize zone. Primary data on land use activities in the area were identified by use of field observations through transect walking. Observations through transect walks were made along the river on each zone for the identification of surface features and land-use types. Landsat images on land use activities and land cover for years 1988, 2000, 2009.

The landsat images collected were analysed by stacking different images representing different bands. Landsat image for the year 1988 had 7 bands while that of the years 2000 and 2010 had 8 bands. The colour composites used for classification were ultra blue for band 1, blue for band 2, green for band 3, red for band 4, near infrared for band 5, shortwave infrared 1 for band 6, shortwave infrared 2 for band 7, panchromatic for band 8. This process was done using ERDAS imagine software. Land use and land cover classification followed. It was done by first identifying the signatures that represent the different land cover categories. The categories were identified by sorting the pixels of the images into classes based on their signatures and classification decision rule. The decision rule is a mathematical algorithm that uses data contained in the signatures and performs the actual sorting of pixels into distinct class values (Coppin and Bauer 1996). The percentage change for land use and land cover change was done by use of formula (2) (Renny 2012).

Descriptive data that was collected through field observation, questionnaires and interviews was analysed using chart, maps, tables and photograph.

Land Use and Land Cover Changes 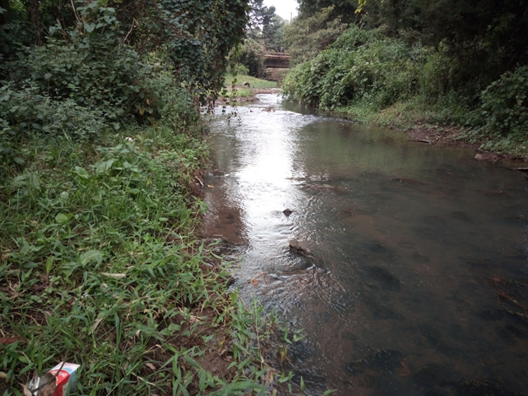 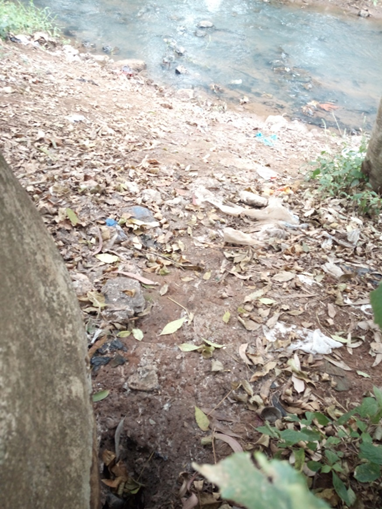 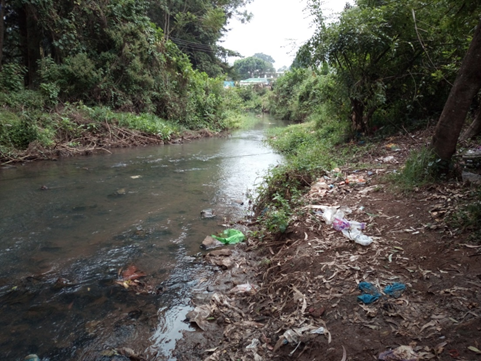 Effects of Land use and Land Cover Changes on River Flow

High flows and low flows of a river are normally affected by changes in land use and land cover. This study has shown that during the rainy season the volume of river flow increases. This may be due to increased surface run off and reduced storage in the sub-catchment. The annual flow volumes change from time to time depending on rainfall amounts, water use patterns and evaporation rates. Ragati River experiences unequal distribution of flows within the year. The study also revealed that the annual volumes in the river are higher during the long rains and during short rains there are relatively small volumes of flow. The high flows experienced during the rainy season and the low flow volumes during the dry seasons show that the annual flows over the years have been determined by changes in the amounts of rainfall during the two rain seasons. These changes in flow can also be caused by are depletion of vegetation cover in the sub-catchment which reduced capacity of the sub-catchment to store moisture. Water resources and stream flow are largely affected by land use. Such land use activities include change in forest cover, cropland, pasture and urban land use.

The study revealed that that the major land use and land cover change in the sub- catchment is agriculture and increase in built up areas. These changes have had negative effects on the flow regime and recharge of Ragati River with increased demand for water and on food security. The results also revealed that more land-use and land cover changes are likely to take place as more land is converted over time especially forest land to agricultural land, and agricultural land to settlements, which threatens the existence of water sources in the future.