In this study, a single pressure HRSG that includes an economizer, evaporator and superheater is considered. The HRSG provides energy for steam production within a steam power plant (see Figure 1). 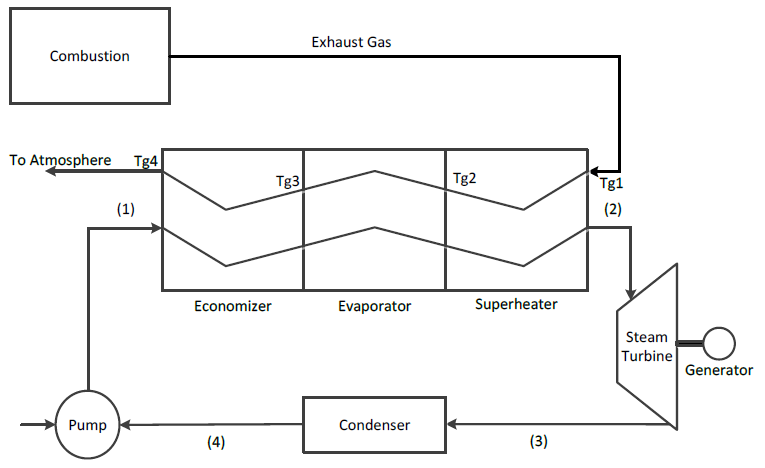 The fuel is taken to be natural gas with the same composition as that used by Cihan et al. (2006). Typically natural gas fired powered plants utilize air-fuel combustion; a more recent idea is to use pure oxygen in combustion. Different exhaust gas compositions result for the two processes, as listed in Table 1.

The composition of the exhaust gas for oxy-fuel combustion is found through a balanced chemical equation using the natural gas composition given by Cihan et al. (2006) and pure oxygen as the oxidant with the same amount of excess oxygen as used in air-fuel combustion to maintain the amount of fuel in each scenario. It is common for oxy-fuel systems to replace the missing nitrogen through recirculating CO2, since producing pure oxygen is typically energy consuming and expensive. For this study it is assumed that nitrogen is not replaced; this allows for a comparison of HRSG and power plant performance when CO2 recirculation is not employed. The amount of excess oxygen is determined by comparing of the amount of oxygen utilized in the actual chemical reaction to the theoretical chemical equation where no excess oxygen is utilized. Balanced chemical equations are developed based on the work of Cihan et al. (2006) under the assumption that all components are ideal gases. The balanced chemical equation for the air-fuel combustion reaction is

The assumed operating conditions for the HRSG and Rankine cycle are adapted from studies done by Butcher and Reddy (2007) and Cihan et al. (2006) and are listed in Table 2.

The following general assumptions are also made in this study:

The exhaust gas temperature at the inlet of the economizer in the HRSG is:

Applying an energy balance to the gas and steam streams in the evaporator and superheat sections, the steam production rate, \({\dot{m}}_{s}\), for the HRSG is found as follows:

The temperature of exhaust gas leaving the superheater is determined through an energy balance across it. An iterative process, where \(c_{pTg2}{= c}_{pTg1}\) is initially assumed, is applied to solve for \(T_{g2}\):

The exhaust gas temperature at the exit of the HRSG is found using an energy balance across the economizer:

where \(h_{w1}\) is the specific enthalpy of the water at the inlet of the economizer. Using the calculated value for \(T_{g4}\) a new specific heat is used to repeat the calculation for \(T_{g4}\) using Eq. (6) to provide a more accurate estimation of gas temperature.

The exhaust gas is assumed to be an ideal gas mixture and its specific heat is determined through the summation of the specific heats (\(c_{\text{pi}})\) of each component, \(i\), and their mass fraction \({(mf}_{i})\):

The energy efficiency of the HRSG/steam cycle combination \(\eta_{\text{system}}\) is the ratio of the net-work output rate to the heat input rate, where the heat input rate is energy rate associated with the exhaust gas as it enters the HRSG. That is, 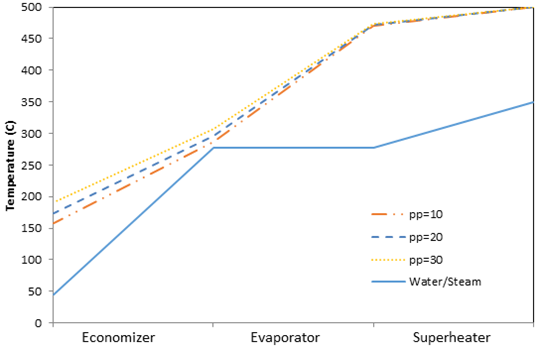 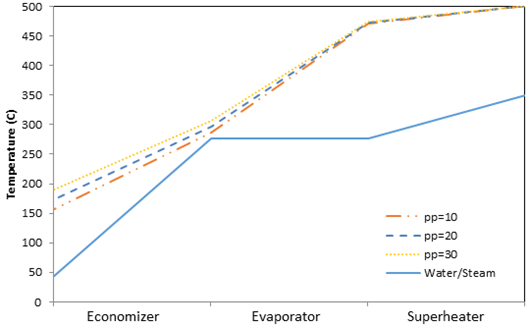 Low exhaust gas temperatures at the HRSG exit indicates a high degree of waste heat utilization in the HRSG and is associated with an increased steam production rate and system efficiency. The variation in steam production rate with pinch point is illustrated in Figure 5, for both air-fuel and oxy-fuel combustion. Lower pinch points increase the amount of steam that can be generated within the HRSG due to increased thermal energy transfer to the water/steam in the HRSG evaporator. When the pinch point is increased the exhaust gas temperature in the evaporator, in the economizer and at the exit of the HRSG are increased. 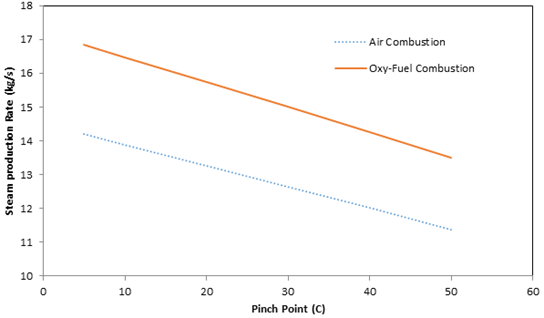 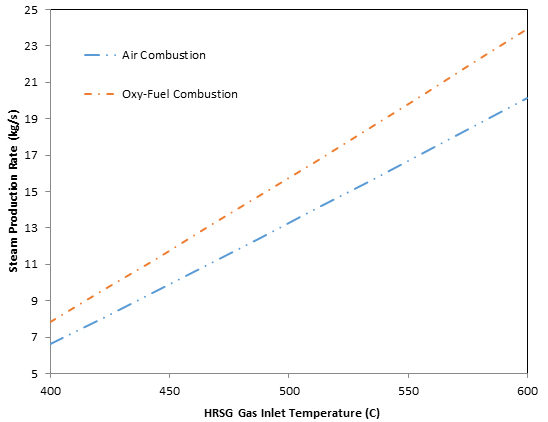 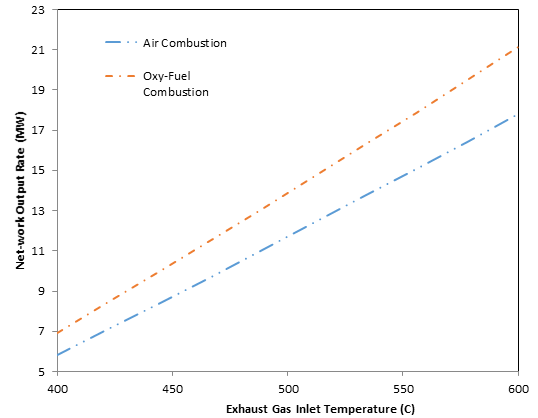 The results show that the use of oxy-fuel combustion enhances the HRSG and steam cycle system performance. The effect of using oxy-fuel combustion on energy efficiency is shown in Figure 8. Overall, oxy-fuel combustion increases the system efficiency and the increase becomes more pronounced at higher temperatures. The trends are a result of varying specific heat and the amount of thermal energy available at the inlet of the HRSG. This observation agrees with the findings of Butcher and Reddy (2007) and Carcasci and Facchini (2000). 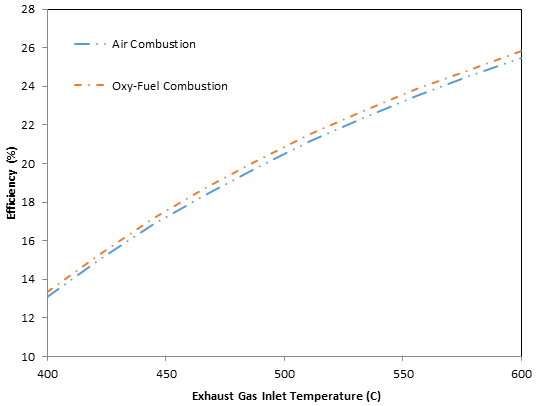 It is found that the use of oxy-fuel combustion influences HRSG and system efficiency. The energy efficiency of the steam power plant, in combined cycles, increases with gas inlet temperature when pinch point and steam production conditions are held constant.

The authors acknowledge the financial support of the Natural Sciences and Engineering Research Council of Canada.