The existing study demonstrates that water hyacinth (eichhorniacrassipes) is a potential adsorbent for the removal of Congo red dye from synthetic wastewater by batch process. The experiments were conducted to study the influence of various parameters such as initial dye concentration, pH, contact time and adsorbent dosage at different operating conditions. The effect of pH and dye concentration was found to be significant and the maximum removal was detected at pH 5 and concentration 100 ppm; considered to be optimum values. The removal of Congo red was consistent initially proportional to the adsorbent dosage. The adsorption process followed Langmuir adsorption isotherm model; point out that the process supported monolayer adsorption of Congo red on the adsorbent surface. Adsorption kinetics closely followed the pseudo-second-order model and mass transfer analysis indicated better transportation of adsorbate from solution phase to solid phase. These results point out suitability of the locally available low cost adsorbents in the niche area of wastewater treatment and can be implemented in commercial dye enriched industrial effluent.

Water resources, soil fertility, aquatic organisms and ecosystem integrity are adversely affected by toxic effluents which are discharged from various chemical industries. Textile industry is one of the chemical industries where coloring effluents are the major encountered problems.The textile wastewater is rated as the most polluting discharges among all industrial sectors (Awomeso et al., 2010, Vilaseca et al., 2010). The textile industry produces large amount of dye contained wastewater in dyeing and finishing processes. Dyes usually have complex aromatic molecular structure which makes them non-biodegradable (Gharbani et al., 2008, Taha, 2011). Due to non-biodegradability, the components of dye substances create severe problem not only to the ecosystem but also create toxicity to the biological life (Choi et al., 2004). Various physical and chemical treatment processes such as coagulation, flocculation, membrane filtration, etc. are commercially practiced and removal efficiency of these processes are satisfactory (Robinson et al., 2001), however, these processes are costly, large amount of sludge is produced during operation and ecologically unsafe. From these perspectives, adsorption is one of the most effective and alternative methods to remove dyes from wastewater (Deans et al., 1992, Nigam et al., 2000). Adsorption is the method for separation of mixtures on laboratory and industrial scale where it is a surface phenomenon that can be defined as the increase in concentration of a particular component at the interface between two phases. In this study, we represent how dye can be removed from synthetic wastewater through adsorption by using water hyacinth as bio-adsorbent. Water hyacinth is one of the abundant weed in the world but it can be employed as a bio-adsorbent after some modification that is capable to remove various industrial dyes such as methylene blue, Congo red, crystal violet, malachite green from aqueous solution (Nath et al., 2013). In case of heavy metal removal from aqueous solution, water hyacinth showed great potentiality. Water hyacinth has the ability to uptake copper, cadmium, chromium, and zinc from textile wastewater with high efficiency (Mokhtar et al., 2011, Ajayi and Ogunbayo, 2012; Mahmood et al., 2005). Nowadays, a large number of low cost adsorbents have drawn attention to the researchers due to their capacity, availability and ease to operation.These are, for example, rice husk (Reddy et al., 2013), wood dust (Garg et al., 2004), tree bark powder (paul 2013), peat (Fernandes et al., 2006), lignin (Cotoruelo et al., 2010), wheat bran (Ata et al., 2012), brown sea weed (Vijayaraghavan et al., 2008), banana and orange peel (Annadurai et al., 2002), fly ash (Janos et al., 2003), pineapple stem waste (Hameed et al., 2009), tuberous pulp, sugarcane pulp, coconut pulp (Pramanik et al., 2011), etc. However, the search for simple, economic, eco-friendly and highly effective adsorbents are still challenging. From these perspectives, water hyacinth was selected as a bio-adsorbent to remove dye from synthetic wastewater.

In the present work, naturally available low–cost adsorbent, such as water hyacinth has been used as an adsorbent for Congo-red dye removal from aqueous solution. The consequence of the experimental parameters such as initial pH, concentration of dye, adsorbent dosage and contact time has been investigated. The outcome of the experiments was analyzed by Langmuir adsorption isotherm, mass transfer and kinetics viewpoints.

Water hyacinth was collected from the local area of Jessore University of Science and Technology, Bangladesh. The chemical substances, e.g., Congo red (CR) dye, HCl and NaOH were purchased from Merck, Germany. Stock solution of Congo red was prepared by dissolving 696.665 g/mol of dye in doubled distilled water and different concentrations (25, 50,100, 200, 300, 400 and 500 ppm) of solution were made by dilution of the stock solution.

Water hyacinth was carefully washed by distilled water to remove the dirt and mud. It was then sun dried and acid washed to eliminate the soluble impurities. Then acid washed sample was dried again in an oven at 105°C for 2 hrs to leave out the moisture from it. The dried adsorbent was crushed in a micro-plant grinding machine and converted into fine powder which was stored in air tight plastic containers for further use in the whole experiment.

UV-1650 spectrophotometer (Shimadzu Co., Japan) was used to measure the concentration of solution where maximum absorbance wavelength was 450 nm. pH of the solutions were studied over the range from 4 to 8 through pH meter.

The batch experiments were run out to investigate the influence of various parameters including contact time (0 to 210 mins), pH (4 to 8), adsorbent dosages (0.5 to 5 g/L). In this study 250 ml conical flasks were used to keep 100 ml adsorbate solution of various concentrations (25, 50,100, 200, 300, 400 and 500 ppm) and known amount of adsorbent were added into each flask at different conditions which shaken continuously at a constant oscillation of 211 osc/min for 3.5 hrs. Then the solution was filtered and the remaining sample was analyzed to determine the adsorption percentage of Congo red which computed by the following equation (1):

Adsorption capacity of dye on the adsorbent particles was assumed proportional to the active sites of the surface. For pseudo–second order kinetic rate, the above equation is as in the following equation (3):

If second–order kinetic is applied, the plot of \(t/q_{1}\) against \(t\) of the above equation should demonstrate a linear relationship and \(q_{e}\) and \(k_{2}\) can be determined from the slope and intercept.

Diffusion coefficient (\(K_{\text{ip}}\)) for the intra–particle transport of CR has been calculated at initial dye concentrations and pH by employing the rate equation (4) expressed by Vadivalen and Kumar, 2005:

Langmuir represents the equilibrium distribution of dye molecules between the solid and liquid phases. Langmuir isotherm is valid for monolayer adsorption onto a surface containing a finite number of identical sites.

Based upon these assumptions, Langmuir represented the following equation (5):

Langmuir adsorption parameters were determined by transforming the Langmuir equation into linear form (6):

Mass transfer analysis for adsorption of Congo red on the water hyacinth was carried out using the Mckay et al. (1981) equation (7):

The removal of Congo red dye from synthetic waste water with varying pH is illustrated in Figure 1 where initial dye concentration 100 ppm and contact time 150 min. 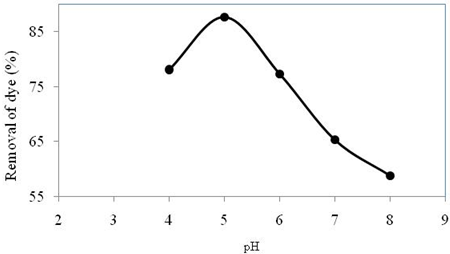 From the figure, it can be seen that the maximum dye adsorption (87%) was obtained at pH 5 and gradual decrease in adsorption take place with increasing the value of pH. Only 58% dye adsorption take place at pH 8. This is due to the fact that, Congo red is anionic dye and at higher pH, OH- ions are plenty and it can compete with the anionic dye which accounts low adsorption. At lower pH, due to the electrostatic attraction between negative charged dye molecules and positive charged adsorbent surface higher adsorption can be observed (Aboul-Fetouh et al., 2010; Alam et al., 2014).For these reason, pH 5 was taken as optimum result for further whole experiment herein. 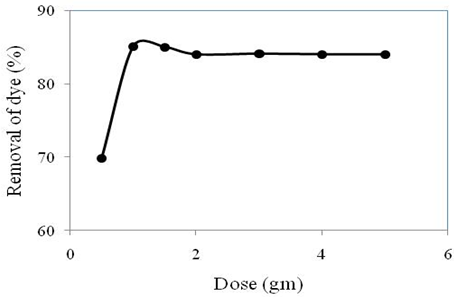 From the Figure, it can be seen that adsorption of dye increased from 69% to 85% with increasing adsorbent dose from 0.5 to 1.0 g/L. After that when we increased the adsorbent dose, the dye removal% decreased due to the fact that there might be formation of particle aggregation resulting in a decrease in the total surface area which responsible for decreasing adsorbed amount per unit mass (Khan et al., 2015). Even if the uptake of dye increased by increasing the adsorbent dose beyond a dose of 1.0 g/L, the rise of dye removal% is insignificant and capacity of adsorbent is low. Therefore, further increase of dose result the much production of sludge and wastage of material. Similar result was found from lead ion removal by bamboo based activated carbon which is reported in Khan et al., 2015. Thus 1.0 g/L of adsorbent dose was taken as an optimum dose for further experiments.

This study was performed by changing the initial dye concentration in the range of 25 to 500 ppm (Figure 3) with optimum conditions received from previous experiments (adsorbent dose 1.0 g/L, contact time 150 min and pH 5). 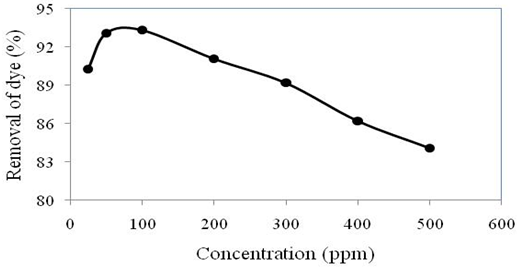 Effect of contact time on the removal of dye by the water hyacinth as adsorbent is illustrated in Figure 4. It showed that the removal percentage increased (0 to 96%) with the increase in contact time (0 to 150 min). Highest removal (96%) was obtained at and above 150 min. It means that the removal rate becomes slower with time and finally a saturation stage is obtained. Similar result was discussed in Kumar and Bilal, 2018. 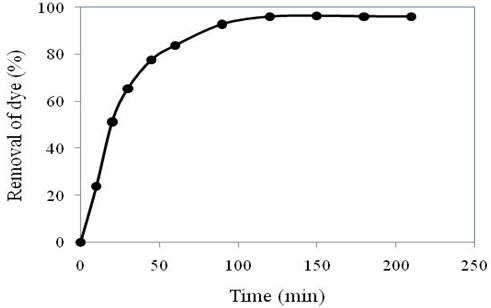 Pseudo second order kinetic model was studied at optimized operating conditions such as concentration 100 ppm, pH 5 and the results were described in Figure 5. The figure (\(t/q_{t}\)versus \(t\)) showed linear plot from which the value of \(q_{e}\) and \(k_{2}\) were calculated (Table 1). The result revealed that \(R^{2}\) value is close to 1 and linearity of this curve indicates that the kinetic data fitted well with the pseudo second order model. Similar results were also reported in Cheng et al., 2015 to uptake CR dye via activated carbon. 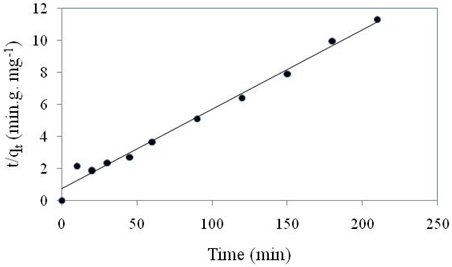 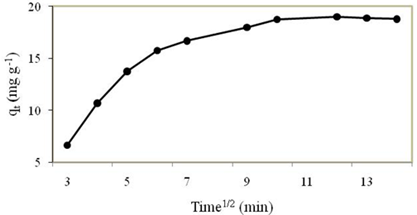 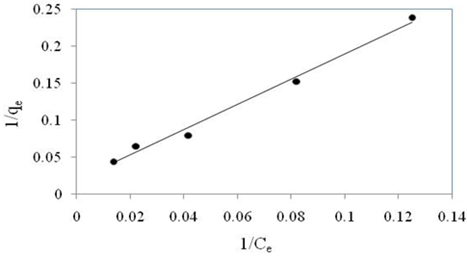 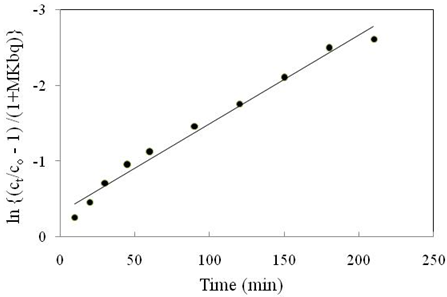 The values obtained from the experimental analysis shown that the velocity of the adsorbate Congo red for transporting from bulk i.e. solution phase to solid phase was quite good (Bhattacharya et al., 2008).

In this study, Congo red dye was removed from aqueous solution quite successfully by water hyacinth as a natural adsorbent. The effect of various parameters like pH, adsorbent dosage, initial dye concentration and contact time were evaluated on the uptake capacity of the adsorbent. The optimum dye removal by using water hyacinth as bio-adsorbent was achieved at pH 5, concentration 100 ppm and for contact time 150 min. Monolayer adsorption capacity of the bio-sorbent was obtained to be 53.76 mg/g, confirmed by Langmuir fitting.The results of the kinetic study suggests that adsorption of Congo red on the selected adsorbent followed pseudo second order kinetic model and the intra-particle diffusion model showed larger surface adsorption. The mass transfer analysis indicated advanced movement of adsorbate toward water hyacinth adsorbent.